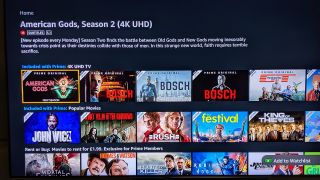 Online video subscription services have caused an astonishing 25 per cent rise in UK data consumption over the last year, according to Ofcom statistics.

While the increase in penetration of video streaming services such as Netflix and Amazon Prime Video has only gone up from 53% to 58% of the population, the Communications Market Report states that those who have signed up are using more data than ever before.

The average amount of data used by each fixed broadband connection in the UK has shot up to 240GB per month between 2017 and 2018 to meet demands and consumption on mobile has grown to match and is now up to a staggering 2.9GB per device.

That change cannot be accounted for by the proportion of people streaming the free to view catch-up services such as iPlayer and ITV Hub which has stayed mostly static. Indeed, for some age groups, the will to access these latter services has declined.

Instead, it looks like services such as Amazon Prime Video and Netflix, and perhaps the higher quality video they offer - HD, 4K and HDR - is leading to this noticeable increase in data consumption.

There are also reductions in the number of people watching live TV in the UK. Numbers are still high with 88.5 per cent of us tuning in every week for an average of 3 hours and 12 minutes each day, but that’s down from 90.2 per cent of the population and by 11 minutes of live screen time.

The drop is most pronounced in younger groups with 16-24-year-olds and 25-34-year-olds averaging 15 minutes and 18 minutes less live TV each week than in 2017. This may be a result of an increase of viewing on mobile devices as much as it indicates a lessening of interest from Millennials and Generation Z in live TV.

The report will come as good reading to both Amazon Prime Video and Netflix, the latter of whom increased its subscription prices back in May.