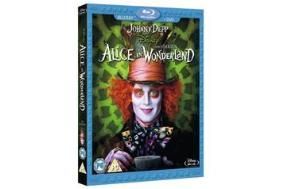 The 2D version of the film is available as a Disney Double Play release (one Blu-ray and one DVD) or as a Triple Play version (one Blu-ray, one DVD and one digital copy).

A host of bonus features explore the whimsical world of director Tim Burton (responsible for Charlie and the Chocolate Factory, Sweeney Todd) including a look inside the world of the Mad Hatter (played by Johnny Depp) and the visual effects used to grow and shrink Alice (Mia Wasikowska).

The film also stars Michael Sheen as the White Rabbit, Matt Lucas as Tweedledum and Tweedledee, Barbara Windsor as the Dormouse, Stephen Fry as the Cheshire Cat, Paul Whitehouse as the March Hare and Helena Bonham Carter as the Red Queen.

Bonus features on both the DVD and Blu-ray are: Finding Alice, The Mad Hatter and Effecting Wonderland.

There's no confirmation yet as to when the 3D Blu-ray will be released.