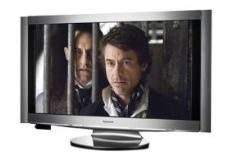 As a wireless TV, this really fits the bill. Whether it's worth the money is questionable

No, it's not suddenly 2004. Panasonic really does want £4300 for this 46in plasma, the sort of swaggering price ticket unseen seen since the early days of Pioneer's mighty Kuros. If you can't claim it back on expenses, what would prompt you to pay such a giddy amount for a TV?

The Z1 has gorged at the specification trough, so that's a start. It's packing Panasonic's NeoPDP 600Hz technology, with all the motion stability that implies, and it's sporting a Freesat tuner alongside Freeview and analogue equivalents too.

Like some less expensive Panasonics, it's wearing a badge to indicate it meets THX's criteria for picture performance and is ready to join your home network via ethernet.

Most intriguing of all, it's tricked out with Panasonic's WirelessHD transmission system. The Z1 utilises a media box to handle all inputs and processing, and information (up to and including 1080p/24fps) is wirelessly beamed to a bolt-on receiver on the chassis. Plug the screen into the mains, and that's it in terms of wiring.

Wallmounters should be aware of the depth of the Z1, though. Panasonic's website refers to 'stylish, slim design'; a sticker on the bezel claims a depth of one inch. But there's a 'protruding portion' that ups the depth from 24.7mm to 50mm – and the bolt-on wireless receiver makes the screen deeper still.

There's little of the overriding 'yellowness' to images here than we've seen on some recent Panasonics. There's not quite the fine detail on show that some less expensive alternatives can muster, though, and compared to a Pioneer Kuro (the flatscreen benchmark for ages now) it's decidedly ordinary.

It's a similar story with DVD pictures. The Z1 upscales confidently, and the same facility with motion and with black shades is in evidence.

Picture noise intrudes more than we were anticipating, mind you, and the relative lack of detail means skin-textures and the like aren't as convincing as they should be.

Stable images from Freesat and Freeview
Freesat images are bright and stable, Freeview equally enjoyable when the quality of the broadcast allows, and analogue broadcasts make us long for the day those signals are no more.

Throughout, sound from the detachable speakers is on the weighty side of ordinary, but no so much that you'll bin your cinema system.

So in pure performance terms, the Z1 has ideas above its station: the pictures it produces don't square with the price tag. And, like so many of us, it's not as slim as it thinks it is either.