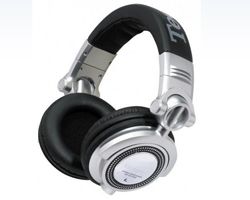 A favourite amongst DJs, the RP-DH1250 and the RP-DJ1205 headphones will be left pretty much untouched on the inside but will now come in “sleek new packaging”.

The headphones promise top-notch sound quality alongside a flexible design that enables you to twist both earphones, ideal for amateur and pro DJs alike.

Water-resistant and with a closed-back design, the Technics RP-DH1250 and the RP-DJ1205 headphones offer 3,500 mW power handling capacity and claims a 5Hz-30kHz frequency response to deliver high volume with minimal distortion.

A 24k gold-plated stereo plug is bundled with the cans, reducing signal loss and adding a nice aesthetic touch.

The Technics SL-1200 series of turntables was launched in October 1972 by Matsushita, which became the Panasonic brand, under the Technics name, and finally discontinued in 2010.

Originally released as a hi-fi record player it quickly became the industry standard among radio and later club DJs, thanks to the direct drive high torque motor design, which made it robust and reliable.