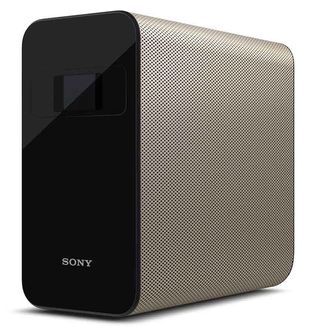 We've seen a fair few portable projectors in receny years, such as the Philips Screeneo 2.0, but we haven't had one with Android and virtual interaction.

The Sony's touchable projection feature, made possible through an infrared sensor and real-time detection via a built-in 60fps camera, turns the beamed image into a virtual screen, letting you control it on a table, wall or kitchen worktop.

You can then carry out typical smartphone functions on a giant projector screen, just like in Minority Report. You can browse the internet, stream videos, use social media and messaging apps – even trigger Google voice assistant. It's also compatible with PlayStation 4 Remote Play, so you can use it as a PS4 game controller.

Thanks to the Android OS, it will play ball with any app or game downloaded from the Google Play Store. The Xperia Touch home screen also provides real-time weather information, a memo board, calendar access, and a Skype portal for video chat, in a similar way to a phone or tablet home screen.

And if all this sounds slightly familiar, you might recall the prototype we saw last year. It looks like Sony has finished the job now.

MORE: 5 devices to look forward to at Mobile World Congress 2017

Aiming to be ‘hands-free, eyes-free and ears-free’, the Xperia Ear 'Open-style CONCEPT' in-ears (pictured above) aim to provide an ‘ambient’ headphone experience whereby you can listen to music and receive notifications without being completely unaware of the world around you.

To achieve this, two acoustic conductors and driver units work together to transmit sounds directly to your ears, while Sony Agent Technology – essentially a personal assistant – is built-in to respond to voice interaction and head gestures.

The concept is based on the 'open-ear' audio technology developed within Sony's Future Lab Program, which enables consumers to trial and shape prototypes from Sony’s R&D division. And all this naturally reminds us of the Apple AirPods, and other completey wireless earbuds.

The Xperia Touch will be available in Europe in spring for €1500, while pricing and release information for the Xperia Ear “Open-style CONCEPT” in-ears is yet to be revealed.