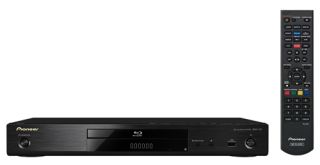 Pioneer has unveiled the new BDP-170 Blu-ray player as the successor to the impressive, five-star rated BDP-160.

The BDP-170 is also an entry-level player and offers built-in wi-fi and support for Miracast streaming from smartphones and tablets.

DLNA is onboard once again, enabling online access to YouTube and Picasa. It also brings support for wi-fi direct for direct connectivity to mobile devices.

Blu-ray, DVD, CD and SACD are all supported, along with Blu-ray 3D with 36-bit Deep Colour. HDMI 1080p/24 Hz output is also supported.

The BDP-170 has a wide selection Dolby and DTS surround codecs on board as you'd expect: Dolby True HD; Dolby Digital Plus; DTS-HD Master Audio and DTS-HD High Resolution Audio. It's also equipped with a two-channel 24-bit/192kHz DAC.

A number of file types are also taken care of: FLAC; WMA; MP3; MKV; DivX+ HD. Mobile device-specific files such as 3GP; FLV; MPEG; AVI and WMV are catered for too.

The new player comes with a Quick Start/Quick Tray operation and '1.5 x View Scan with Audio' functions – the latter allowing users to scan contents of a BD disc while making the audio understandable.

As with the BDP-160, the BDP-170 works in tandem with the free iControlAV5 app available for iOS and Android devices.

The Pioneer BDP-170 Blu-ray player will be available from next month priced £150.