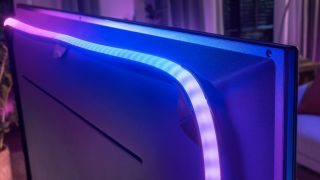 Want to add Philips Ambilight to your TV without having to spring for a whole new set? If you don't mind altering the aesthetic of the back of your TV somewhat, Philips is launching a new gradient LED lightstrip that promises to "perfectly combine several light colours at the same time and mimic the content on the entire screen for an overwhelming, multi-room and unique entertainment experience".

For the uninitiated, Ambilight uses LEDs around the edges of the TV to echo the on-screen colours onto the wall behind. It makes the edges of the screen appear much less apparent, creates the illusion of a bigger picture and aims to really draw you into the scene. Yes, it's been around for a few years, but its popularity endures – and we remain big fans of the technology.

The Philips Hue Play gradient lightstrip will be available in three sizes, optimised for 55, 65 and 75-inch screens. It's also the firm's first lightstrip to be individually accessible; it syncs with on-screen media, meaning that each individual LED in the strip should generate different colours and brightness levels.

Unlike earlier Hue lightstrip iterations, the Hue Play gradient lightstrip comes with rounded mounting brackets too, which Philips promises will make attaching the thing to your TV a doddle. The firm says that adding the lightstrip to the back of your TV will make "colours flow naturally into one another and create unique lighting effects on the wall behind the television".

So can you just fit it to the back of your screen and get on with enjoying that newly-enhanced, immersive picture? Not quite. It relies on the existing Hue Play HDMI sync box, which you'd need to buy separately. This sits between your TV and source, analysing the signal as it comes in. Whether or not this would impact the picture quality (or create a lag) remains to be seen, but it's an idea that's definitely piqued our interest.

You'll also need a Hue Bridge, which you can control from the Hue Sync mobile app. The Hue Bridge can be used with up to 50 lamps and accessories throughout the home. It makes it possible to set timers and routines, and to control your lights while you're outside your home.