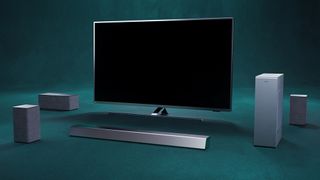 Philips recently announced that the DTS Play-Fi wireless multi-room streaming platform would be coming to its 2020 Android TVs, and now the company has announced more products – old and new – that will get support.

These will all connect and work together under the DTS Play-Fi umbrella, collectively part of an ecosystem that Philips is calling the 'Philips TV & Sound Wireless Home System'.

All 2019 Philips Android TVs – from the 7304 model upwards – will receive an over-the-air update in the third quarter of this year to add DTS Play-Fi connectivity. Philips' just-announced Fidelio B95 (£800) and B97 (£1000) Dolby Atmos soundbars will support Play-Fi too, as will five imminent additions to the more affordable 8000 soundbar range, which are priced between £300 and £500.

The Philips TV & Sound Wireless Home System is also getting two new wireless speakers, the vertically orientated W6205 and the larger, horizontally orientated W6505. Both have LED lights that can sync to a Philips TV’s Ambilight system, allowing the trademark lighting feature to expand further into a room. In addition to DTS Play-Fi, Bluetooth, Google Chromecast, Apple Airplay 2 and Spotify Connect are all present, as is the ability to pair two speakers in stereo. Pricing is yet to be confirmed but the models are expected to launch towards the end of the year.