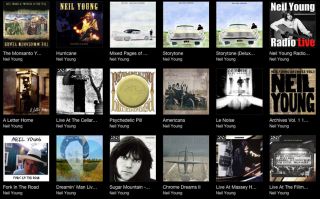 In a post on his Facebook page, Young said: "Streaming has ended for me... It's about sound quality. I don't need my music to be devalued by the worst quality in the history of broadcasting or any other form of distribution."

The artist has long waged war on compressed music, though it seems the launch of CD-quality, lossless streaming services such as Tidal and Qobuz may have passed him by.

At the start of the year Young suggested MP3 was from a bygone era: "MP3 is doing OK considering it was designed for dial-up modems but we just couldn’t stay there," he said.

"When people ask me ‘do we need high-res music?’ I really don’t know. I can’t tell you but I know for me - I can listen to music again. I didn’t listen to music for the last fifteen years because I hated the way it sounded and it made me pissed off that I could not enjoy it anymore."

Young has famously developed his own hi-res music player, the PonoPlayer, and a Pono ecosystem offering hi-res downloads and a deskop music player - though neither are officially on sale in the UK. Pono also recently launched a tool to let PonoPlayer owners compare the difference between formats.

Now it seems Young has had enough, and looks set to withdraw his music from streaming services such as Apple Music and Spotify, though it is still available on both services at the time of writing. It remains to be seen whether CD-quality streaming services will escape his ire.

The news was announced on his Facebook page and greeted by, at best, a mixed response, as the comment above, which was the most liked comment on the status, neatly illustrates.

Young says it isn't about the money rather the sound quality, which would suggest he would be happy with lossless services. We shall see.

"It's not because of the money, although my share (like all the other artists) was dramatically reduced by bad deals made without my consent. For me, It's about making and distributing music people can really hear and feel. I stand for that. When the quality is back, I'll give it another look. Never say never."