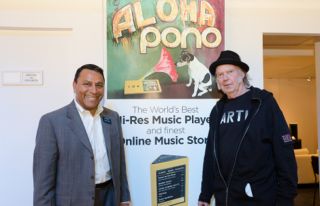 While the PonoPlayer, which was also on show at CES, may have got most of the attention, the Young-backed plan to bring high-resolution music to the masses also includes a PonoMusic high-res download site. And it is now up and running in the US.

The Pono team announced it would be launching a download store last year and having been viewable in beta mode for some time, it's now open for business.

And it ain't cheap, coming in at similar prices to HDtracks but noticeably more expensive than high-res content on 7digital, let alone CD-quality or compressed files.

The store offers albums and single tracks for download in a variety of high-res sizes, with a 24-bit/96kHz version of D'Angelo's Black Messiah costing $17.99. The same album on HDtracks in the UK is £17 or just £12.99 via 7digital for the same high-res version.

There's no word on an official UK launch for the store.

Dinesh Paliwal, chairman and CEO, Harman, said: "We are excited to collaborate with Mr. Young and the team at Pono Music to expand their reach into the car and let people hear music as the artist intended, a mission of ours at Harman.

"By joining forces with Pono, we will leverage our collective talents and assets to deliver the best in audio to those who love music as much as we do."

Neil Young said: "Our collaboration with Harman... is an exciting step forward in our journey to bring HD-quality music to people wherever they want to listen to it."

We look forward to hearing more details. Look out for a full review of the Pono PonoPlayer soon.