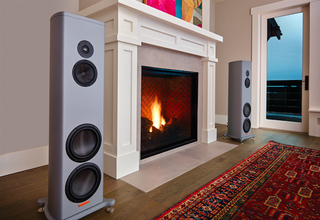 Magico has announced a new pair of seriously high-end speakers, the S3 Mk II, which are launching at CES 2017.

Sitting between the S1 Mk II and the S5 Mk II, this addition to the S Series features a new 9in bass driver that promises to lower distortion. It's made of a nanographene cone, and uses a 5in titanium voice coil.

Above the bass driver is a 15cm nanographene midrange driver, which Magico claims to be 20% lighter and 300% stiffer than previous S Series cone designs. Above that is a 25mm diamond-coated, beryllium-diaphragm tweeter.

The S3 Mk II cabinet is formed from a single piece of extruded aluminum that is 3/8-inch thick and 12-inches in diameter.

There's also a newly-designed bass plate which, according to the company, has been designed to lower the speaker's center of gravity, increasing dynamic range and lowering floor noise.

Still, they're cheaper than the Magico S7 speakers...

MORE: How to buy the right speakers