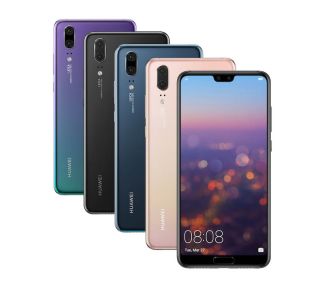 But the jewel in Huawei’s crown is the 6.1in P20 Pro, which has an OLED FullView display and features three cameras: a 40MP primary camera, an 8MP telephoto addition, and a third monochrome sensor designed to add depth and detail in low light conditions.

Its aperture can go as low as f/1.8, which should also help taking photos in the dark. On the front is a 24MP selfie camera.

Huawei is definitely focusing on photos, as its also boasting “4D predictive focus”, which apparently makes it easier to take photos of moving images and provides “intelligent suggestions to frame group shots and landscapes”.

The P20 Pro isn't bezel-less - on the bottom is a fingerprint button to unlock the phone. It's an interesting choice in the current smartphone market, and we're keen to see how it works in practice.

Both the P20 and P20 Pro also include support for Dolby Atmos and content encoded using Dolby's AC-4 audio codec.

Huawei has also launched a couple of new audio accessories: Huawei’s FreeBuds and the Huawei ANC earphone (a pair of noise-cancelling in-ears). It's fair to say Huawei isn't really known for its headphones, so it'll be interesting to hear how they stack up against the class-leaders.

Available in April, the new Huawei P20 and P20 phones come in graphite black, midnight blue, pink gold, and twilight (purple). Pricing is yet to be announced.

Dolby Atmos: what is it? How can you get it?