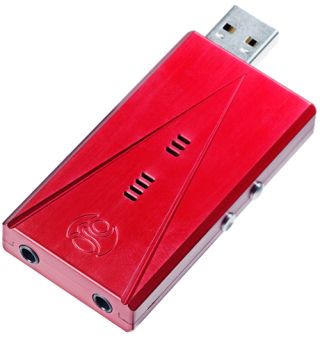 Last month, we brought you news that the crowd-funded Geek Out DAC was launching at the Bristol Show 2014. And it has now been confirmed that it's available to buy in the UK.

Geek is a new brand from LH Labs, which is a division of Light Harmonic that produces the high-end and expensive Da Vinci DAC.

The Geek Out DAC – a USB 2.0 DAC and Class-A headphone amplifier – started life on Kickstarter and easily exceeded its original funding goal of $28,000.

It's a product that has been designed to "bring good sound to a non-audiophile market, so that commuters, gamers and music-lovers can better enjoy the stuff they love".

The high-res DAC plugs in to your computer, laptop or any digital source with a USB port, with LH Labs claiming its amplifier is 10-times more powerful than the headphone amp typically found in laptops.

Geek Out comes with a six-inch USB extension cable and features two headphone jacks, while you'll have a choice of four colours – black, silver, blue and red.