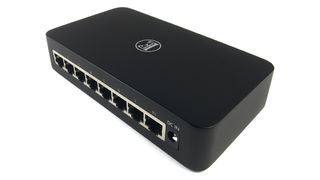 Back at The Bristol Hi-Fi Show 2020 in February, Chord Company announced it was relaunching English Electric* to front its audio electronics business. It debuted the first English Electric product, the 8Switch hi-fi grade network switch – which, three months later, is now on sale.

The eight-port 8Switch has been specifically designed to act as a filter for streamed audio to remove unwanted noise and thus preserve music quality. Supposedly, the 8Switch lowers jitter by up to 90 per cent.

The 8Switch, which features eight 100/1000 Base-T gigabit Ethernet ports, is driven by a customised crystal oscillator that English Electric says allows for a more stable transmission of music data.

It uses a power supply and clock circuit that each have two electrical noise-isolation circuits for stabling network signals, as well as EMI (Electromagnetic Interference) absorber for further reducing noise from the digital circuit.

That's all housed in an aluminium enclosure to protect it from acoustic and electrical noise, with damped feet also doing their bit to reduce the effects of unwanted mechanical vibration. English Electric’s engineers even set out to improve the power signal by using a high-quality adapter.

*Founded in 1986, English Electric (as it became known from 1918) grew into a manufacturer of electrical equipment and machinery, specialising in motors, transformers, railway locomotives and traction equipment, before expanding into consumer electronics, computers and aviation years later. After several mergers, the name was lost in the late '60s – only to be reborn in the audio sector here in 2020, over 50 years later!