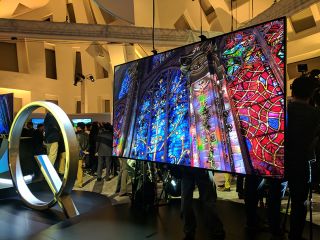 By now you've probably heard a lot about OLED, a panel technology that has been firmly backed by LG and now Panasonic, and, most likely, Sony. But QLED? Perhaps not so much. That could be about to change, though, as Samsung has unveiled three complete 2017 TV ranges that use this alternative TV tech.

This new TV technology allows for not only screens thinner than traditional LED TVs, but also, according to Samsung, 'greater stability, greater efficiency and optimal brightness' when it comes to picture performance. Samsung says the new panel pixel structure, alongside the quantum dot pixels and low reflective panel technology, will help improve efficiency and viewing angles.

Samsung claims the TVs are also capable of 1500 to 2000 nits brightness – comfortably beyond the 540-nit minimum standard of the Ultra HD Premium specification. Of course, 4K and HDR support - also part of the 'Premium' standard - are both on the menu too.

While QLED technology is clearly the headline news, Samsung has made it clear that its 2017 TVs aren't only about picture quality. Samsung aims to 'bring craftsmanship and art to the living room' with its new 'Q Style' design, too.

For the past few years, on many of its TVs, Samsung has housed its TV connections in a separate 'One Connect' box instead of on the TV itself to help with cable management. It's a concept the brand is sticking with, and for the 2017 models the box connects to the TV via a 5m optical cable.

There's also a new Samsung One Remote, designed to work across more devices and sources including set-top boxes and games consoles. Samsung has been vocal about improved mobile integration via its Smartview app, too, with a spokesperson saying that a smartphone will be able to carry out more functions than ever before.

Information on screen sizes, pricing and release dates is yet to be confirmed, but we'll bring you more as soon as we have it, as well as our first impressions of Samsung's QLED TVs from the CES 2017 showfloor.