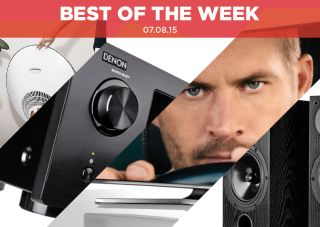 This week Ultra HD Blu-ray players came a step closer to reality with companies now able to apply for an Ultra HD licence, Cambridge Audio launched its CXU universal media player and Bang & Olufsen jumped into the multiroom market with the BeoLink Multiroom.

Elsewhere, we had lots of great products for you to read about in Samsung's cracking UE48J6300 TV, ProAc's enthusiastic Studio 118 speaker and Denon's fantastic AVR-X2200W AV receiver.

Also, it's new magazine week as the September issue of What Hi-Fi? is now on sale. There's plenty to sate any hi-fi/home cinema fanatic with reviews of budget turntables, £500 AV amplifiers and mains blocks (no, seriously), as well as a feature on picking the best headphone.

The Blu-ray Disc Association has announced that from the 24th August, companies can begin the process of licensing Ultra HD products, with the hope of seeing 4K Blu-ray players in stores by the end of the year.

As sales of 4K TVs continue to grow, content on the platform is still lacking. Having Ultra HD Blu-ray players increases the number of 4K providers, with Netflix and Amazon, along with BT's new Ultra HD sports channel.

Cambridge Audio has announced a new universal player, set to go on sale at the end of August for £900.

What is a universal player? Well, in the case of the CXU, it can play Blu-ray, DVD, 3D Blu-ray, CD, SACD, DVD-A, AVCHD and HDCD. It can also upscale to 4K, but cannot play native 4K content.

Stay tuned for our review of the CXU in the next few weeks.

Powering the experience will be the new BeoMusic app, which will show your connected devices and allow the user to start and stop music in any room.

B&O's BeoSound Moment, BeoPlay A9 speaker and BeoSound Essence all support it, and you can use the company's own line of TVs as either a speaker or a source within the set-up.

The BeoMusic app is out now.

Samsung has been knocking it out of the park with its TVs recently, and the UE48J6300 is another terrific (curved) set from the Korean company.

The UE48J6300 features all the bells and whistles of a TV that costs £700 but it's the performance that shines. It's superb, the Samsung's skill at rendering wonderfully detailed, vivid images a particular strength.

For £700 this set offers brilliant performance.

ProAc's Studio 118s follow on from the Studio 115s, and while physically there seems to be little difference the two, this is an excellent improvement over its predecessor.

Most of the changes have taken place under the hood and you can feel it in the performance. The 118s manage to deftly weave their way through tracks balancing bass, treble and mid-range for an enthusiastic performance.

You'll want to take care with system matching with a bright amplifier, but other than that, it's hard to find fault with this speaker.

Denon's form in the £500 home receiver has lagged behind rivals with the likes of Sony asserting itself as top dog. That may be about to change with X2200W.

The X2200W boasts plenty of features, including both Dolby Atmos and DTS:X, and the result is a smashing receiver. It's well balanced, incredibly immersive and shows a massive improvement over last year's models in how it handles music.

Denon has put plenty of thought put into this receiver and it shows. Delivering an exciting performance, this is highly recommended.