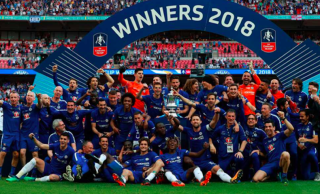 Last week, the BBC confirmed its World Cup coverage - but there was no mention of 4K. Naturally, this led us to believe that, after much anticipation and various rumours, 4K broadcasts may not be on the Beeb's summer menu after all.

But our hopes have been kept alive following another 4K iPlayer trial on the weekend. The BBC streamed the second half of Saturday’s FA Cup Final on its iPlayer service in 4K and Hybrid Log Gamma HDR - as clocked by eagle-eyed (and impressed) viewers.

A BBC spokesperson said, "We continue to do various trials in Ultra HD as we explore the next-generation of TV quality. The FA Cup final gave our engineers a chance to test parts of our live production chain over the internet. During testing there was an opportunity to make some of the game available to viewers, allowing us to put the system through its paces with relatively large audiences."

The BBC test was the latest live 4K iPlayer trial following last month’s stream of the rugby league Challenge Cup fixture between York and Catalan. The Monday after that Sunday fixture, the BBC posted a blog acknowledging the trial.

The blog read: “We’re now looking at the results from this latest experiment to help us build our understanding for how we might be able to provide live events in UHD in the future.”

We could, then, see the Beeb officially recognising its FA Cup Final trial later today (Monday), and perhaps – fingers and toes firmly crossed – even shedding light on any World Cup 4K HDR plans it might have.

Naturally any future confirmation from the BBC would now be rather last-minute – the World Cup kicks off in less than a month, after all – and could come just days before the first blow of the tournament whistle.

Last October, FIFA confirmed all 64 World Cup matches would be available in 4K and HDR thanks to 37 cameras (plus an additional eight super slow-mo cameras, a cable-cam and cineflex heli-cam) and an improved baseline production format.

Israel, Switzerland and Germany are just a few of several countries in the world that have already announced 4K World Cup coverage, with Dutch broadcaster NPO the latest to confirm it would be making an Ultra HD broadcast available.

With Sky streaming the Royal Wedding in 4K on Saturday too, lucky owners of a 4K TV compatible with 4K BBC iPlayer, and a Sky Q subscription, had every reason to be glued to their tellybox. Let's hope more 4K broadcasts are on the way...

How to watch the World Cup - TV, 4K, online, mobile

How to watch 4K Ultra HD on BBC iPlayer

6 things you should know about BBC iPlayer 4K