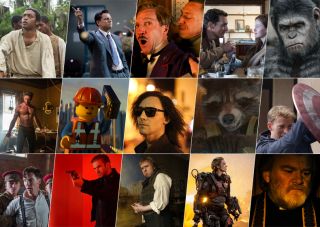 And don't forget to check out our dedicated Playlist Twitter account @WHFPlaylist for updates of our favourite programmes over the festive break.

We'll be back next year for more reviews, but until then enjoy this list - and have a very merry Christmas and a happy New Year!

MORE: Our favourite products of the year

We kick off by starting by the films that didn't make it in to the top ten. Unfortunately they missed out by dint of alphabetical order. And for the rules of this list, any film that had its UK cinema release during 2014 was eligible to be picked.

If only the word X-Men started with an 'e' they'd be further up this list. Still, there was a lot to enjoy in the latest instalment of the X-Men franchise as Wolverine (Hugh Jackman) is sent back in time to avert a mutant and human apocalypse by stopping the assassination of Dr. Bolivar Trask (Peter Dinklage) by Mystique (Jennifer Lawrence). Possibly the best X-Men film since X2.

Buy X-Men Days of Future Past at Amazon

Many heralded Wolf as a return to form for Scorcese (for the umpteenth time) which saw Leo DiCaprio play Wall Street banker Jordan Belfort, who rose to prominence and then enjoyed (or not) a spectacular fall from grace. One to watch simply for the scene where DiCaprio's Belfort tries to make it home after ingesting some 'toxic substances'.

Buy The Wolf of Wall Street at Amazon

Compared to the relatively simple original, The Raid 2 is an attempt to make The Godfather of martial art films. The story may be too convoluted for its own good, but the action on display is breathtakingly fast and when you have characters called Baseball Bat Man and Hammer Girl, you know you're in for a crazy ride.

Read our review of The Raid 2

Buy The Raid 2 at Amazon

Adam Wingard's The Guest is a John Carpenter-esque effort that defies categorisation. Is it an action film; a thriller, a mystery or all of the above? Whatever the case, Dan Steven's (Downtown Abbey) puts in a great performance as David, who is most definitely not who he appears to be.

Buy The Guest at Amazon

A typically stylish, meandering and beautifully shot film from Jim Jarmusch, Only Lovers just misses out. In it, Tilda Swinton and Tom Hiddleston play Eve and Adam respectively, two vampires who re-unite after Adam gets stuck in an existential funk. However, their reunion is disturbed by the appearance of Eve's younger, uncontrollable sister Ava (Mia Wasikowska) who has a rather rampant appetite for blood.

After this performance we're starting a petition for Hiddleston to play Morpheus in the upcoming Sandman adaptation.

Mike Leigh's biopic of one of the great British artists reveals a mercurial man who judging by his face is either pouting or grunting. Perhaps at the same time.

It's a fascinating look at man who painted some of the great works of art and yet felt increasingly adrift from those who enjoyed it.

Edge of Tomorrow (or Live Die Repeat: Edge of Tomorrow) hops into tenth place thanks to both Cruise's and Emily Blunt's performance in this sci-fi action film that pits the Earth against an invading force of aliens. Cruise, an officer with no war experience, is thrown into battle and finds himself reliving the same day over and over after he comes into contact with one of the aliens.

A very enjoyable film, with Cruise playing against type for once, and a strong, committed performance from Blunt who trudges into battle wielding a massive sword. Not something you see everyday (or in this case maybe you do).

Buy Edge of Tomorrow on Blu-ray at Amazon

A terrific sequel that improves on Rupert Wyatt's reboot Rise, Dawn takes the conflict between man and ape further in a broken society where humans are on the brink of extinction and the apes are flourishing.

The apex of Andy Serkis's and Weta's digital motion capture work so far, you won't see more convincing or emotional CGI characters this year (Toby Kebbel's vindictive Koba is excellent). Sure, the humans hover on being one-dimensional (especially the females), but the real stars of the show are Caesar and his troop of apes (and chimpanzees). Pop this into your Blu-ray player just to see the level of detail on each ape and you'll be mesmerised.

A great showcase for the Irish actor Brendan Gleeson, John Michael McDonaugh's follow up to The Guard (which also starred Gleeson) sees Gleeson's priest threatened by an unknown member of his parish during confession.

Troubled by that death threat, he tries to go about his life as normal, but various issues concerning his daughter and his parishioners begin to overwhelm him. Funny in places but also touching and profound, we found Calvary to be a compelling and life-affirming film

Buy Calvary on Blu-ray at Amazon

Did you forget that last year's big Oscar winner was released here in the UK early in January? Following Chiwetel Ejiofor's Solomon Norstrup, a free Black man who's abducted and sold into slavery, 12 Years is a solemn, heart-wrenching film that doesn't shy away from the horrors of slavery.

A difficult film to watch, but one you should probably see.

Buy 12 Years a Slave on Blu-ray at Amazon

Marvel's Phase 2 exploded into life with The Winter Soldier, tying up a loose thread from The First Avenger by bringing back Bucky Barnes (Sebastian Stan) as a brainwashed, Russian assassin with a metal arm and snazzy new sunglasses.

Where The First Avenger was a charming World War II film, Winter Soldier kicks into gear from the off, riffing from the paranoid thrillers of the 70s and cannily casting Robert Redford as the head of S.H.I.E.L.D. Winter cements its importance in the ongoing Marvel universe by shaking things up, having (spoiler alert) Hydra infiltrate S.H.I.E.L.D and pitting Chris Evans' Cap against his former employers.

We can't wait for the sequel in 2016 which will have Evans' Cap going up against Robert Downey Jr's Tony Stark in Captain America: Civil War.

Buy Captain America: The Winter Soldier on Blu-ray at Amazon

Gatecrashing the party is Wes Anderson's enchanting film, The Grand Budapest Hotel, an unexpected highlight of 2014.

Ralph Fiennes proves to everyone who didn't see In Bruges that he most definitely can do comedy, putting in a charmingly winsome performance as M. Gustave - proprietor of the Grand Budapest Hotel between the First and Second World Wars in the fictional republic of Zubrowka.

In true Anderson style, it's old-fashioned, symmetrically framed to a fault and full of whimsy. Fiennes and his lobby boy/protege (Tony Revelori) make for a great double act, while Willem Dafoe's silent thug Jopling is one of the creepy characters of the year.

Buy The Grand Budapest Hotel on Blu-ray at Amazon

Instead you'll find one of the more enjoyable films of the year; a film that mixes espionage and thriller conventions with a dose of comedy. Benedict Cumberbatch's Turing veers towards the 'clever' characters he's built his career on, but there's a hidden charm and a sense of sadness behind the cold and distant personality that he gives Turing.

This is perhaps his best performance so far, and he's backed up by a group of actors all on top form - including Keira Knightley, Matthew Goode, Charles Dance and Mark Strong. A welcome and long overdue look at the feats of a man who helped break German codes during World War II and help the Allies towards victory.

Much talked about, Christopher Nolan's science-fiction film Interstellar warps into third position on our list.

Earth is experiencing a blight of biblical proportions and humanity's only hope is to find another planet to live on. In comes Matthew McConaughey's Cooper, a former NASA pilot - now farmer - tasked with leading a team of explorers to another galaxy to find a habitable planet, leaving his family behind on a journey he may never come back from.

Visually Interstellar is fantastic, the representation of space is hauntingly beautiful and Hans Zimmer's score is one of his best yet, but the bond between McConaughey's parent and his daughter (Mackenzie Foy) is what makes Interstellar compelling, making for Nolan's most emotionally wrought film yet.

We can't wait to see how this film handles on a home cinema set-up when it comes out on Blu-ray next year.

Read our review of Interstellar

The Lego Movie takes the runners-up place and we can't say that we're all that surprised. A box-office hit earlier this year, while it faced criticisms of being a two-hour toy advert, it overcame those worries by being a smart, irreverently funny take on the plastic brick toy.

Doing its own spin on the Hero's Journey, Emmett (Chris Pratt) is prophesised as the 'Special' - except he's not very special. At all.

He joins up with Wildstyle (Elizabeth Banks) and Vitruvius (Morgan Freeman) to take down President Business and stop him from gluing the word together. The plot is intentionally silly and provides plenty of visual jokes but that's not all. You can look forward to tonnes of memorable cameos, outlandish humour and a song ('Everything is Awesome') that will worm its way into your brain and have you singing it non-stop.

Read our review of The Lego Movie

Buy The Lego Movie on Blu-ray at Amazon

(1) Guardians of the Galaxy

Guardians of the Galaxy is our favourite film of the year!

Marvel's one-two punch of The Winter Soldier and Guardians (three if you count the much improved Agents of S.H.I.E.L.D) proved to be a winning combination with audiences. Chris Pratt (him again) is Peter 'Starlord' Quill, an intergalactic criminal who teams up with a group of other 'ne'er do wells' such as Gamora (Zoe Saldana), Rocket Raccoon (Bradley Cooper), Groot (Vin Diesel) and Drax (Dave Bautista) to keep to Lee Pace's Ronan the Accuser and Josh Brolin's Thanos from obtaining a mysterious orb that could give its user the power to destroy the galaxy.

It's one of Marvel's best films to date and while we wouldn't call it their most original, borrowing elements from Star Wars most notably, it does, paradoxically, feel like their most freshest yet. On Blu-ray it looks and sounds gorgeous and in Pratt they have someone with the charisma of Harrison Ford's Han Solo.

A film that has fun at the top of its agenda; its heart set on leaving you with a smile on your face. We're looking forward to what Marvel cooks up with the sequel in 2017.

Read our Guardians of the Galaxy review

Buy Guardians of the Galaxy on Blu-ray at Amazon

So, those were our favourite films of the year. Many others were nominated, including potential Oscar frontrunner Boyhood, The Hunger Games: Mockingjay - Part One and Gone Girl - but they did not enough votes to make it on the list.

Did we leave out one of your favourites? Or perhaps you agree with out choices? Sound off in the comments below and let us where we went right... or wrong.

Have a Merry Christmas and Happy New Year from the entire What Hi-Fi? team. See you next year.