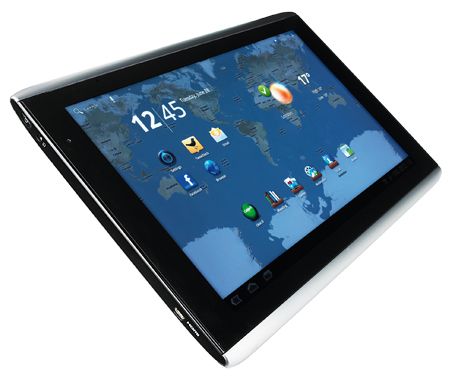 A solid effort, but better build quality and more AV content would help

While Apple's iOS is found on a solitary phone, Android can be found on tons of devices – so it's perhaps no surprise to see the same strategy in the tablet marketplace.

Like the Eee Pad Transformer and the Motorola Xoom, the Iconia A500 uses Android 3.0. With the OS so key to how the device looks and functions, splitting this pack is as tricky as you might imagine.

The price is right
The Iconia has a 10.1 touchscreen, 32GB hard drive, HDMI output, twin cameras... in fact, the spec is identical to the Xoom's, right down to the chip and wi-fi only connectivity.

This does at least mean the price tag catches our eye – the Iconia is around £85 cheaper. Less eye-catching is the chassis, which feels unwieldy.

The screen is the same size, but its border is larger, making it more of a handful. If you think tablets are a luxury rather than a necessity, you'd be forgiven for wanting something a little more impressive-feeling.

The Iconia is as good an example of the Android experience as any other. A fair selection of apps is improving all the time, while viewing the internet – with Flash enabled – is fast and effective.

Some unique features
That said we did have issues with a few features, the live map background for example, which didn't work as well as they did elsewhere.

There is a smattering of unique features. Dolby Mobile adds an extra dimension to movie sound (though we're less convinced of the benefits with music), but the selection of movie and music players seems unnecessary. Only Clear-Fi, which adds streaming capabilities, really adds value.

There's no movie or music store, which is a shame, though there is support for Google Music (currently in beta). Performance is good, with music sounding lively and movies delivering good contrast and detail.

The Android devices are hard to split. Its lower price tag is great, but the Iconia doesn't have the premium look and feel of rivals.