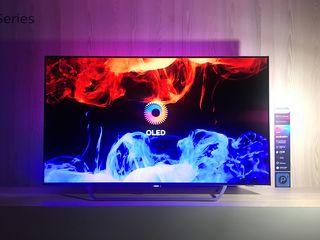 It joins the 9000 series, another OLED series launched at Philips's European TV event earlier this March. Available in 55in and 65in screen sizes, the 9002 will be available to buy in late 2017.

Philips also launched a new 8000 series - 55in and 65in 4K LCD sets with quantum dot technology. There's no pricing yet, with the 55in set arriving by September/October this year and the 65in due in January 2018.

The OLED and 8000 TVs are once again paired with Ambilight - a trademark Philips technology that uses LEDs to emit light behind the TV and extend the picture on screen for a more immersive experience - which makes a welcome return to most of Philips's 4K screens this year.

There’s no support for Dolby Vision HDR as Philips doesn’t see the need for it yet. However, it is monitoring the market to see how the format develops.

More excitingly for UK customers, certain Philips models will also be equipped with Freeview Play, which means its TVs will have all the UK catch-up TV services - BBC iPlayer, My5, All 4, ITV Player - as well as Netflix and Amazon Prime Video apps.

Select models (such as the 7502 and 8602) feature slim soundbars attached to the bottom edge of the screen; Philips calls this “Visible Sound”. Other sets, such as the 9002 OLED, will feature more traditional built-in speakers, while the flagship 9603 has a more powerful soundbase.

Philips has focused heavily on design this year, with its "European Design" ethos aiming for a more elegant, minimal, lifestyle-conscious look.

Available in 55in and 65in screen sizes, the 9603 and the 9002 OLED ranges will support standard HDR10 as well as the broadcast variant HLG.

The combination of the new P5 processor, a wide colour gamut (99 per cent of the DCI-P3 colour spectrum) and a peak brightness of 750nits and 900nits respectively means the 9002 and 9603 have qualified for Ultra HD Premium certification.

Unlike the first 901F OLED, the 55POS9002 won’t have a soundbar built into the screen. Instead, it will feature the company's 'triple ring' speaker technology with a woofer at the back.

The sets will of course feature three-sided Ambilight, Android TV OS, and the old chunky, double-sided remote with QWERTY keyboard.

The 8000 series (8602) marks the first time Philips has used quantum dot technology in its LCD TVs. It sits at the top of Philips's LCD range, and features edge-lit LED backlighting.

The 4K HDR set is powered by the P5 processor, has 1100nits of peak brightness and can display 98 per cent of the DCI-P3 colour gamut - all reasons why it has gained UHD Premium certification.

It's also due to receive Google Assistant voice control after next year's Android Nougat update.

The 8000 series is available in 55in and 65in versions, has a 'floating' integrated soundbar that can be detached and wall-mounted, and is due in early 2018.

Along with 4K, HDR and HLG, the flagship 7502 range features edge-lit LED backlighting.

The 7502 set has a dark brushed aluminium finish and an ‘open frame’ central stand.

The built-in soundbar (“Visible Sound”) is driven by a 45W amplifier for bigger, clearer sound with a wider stereo image.

All sets are powered by Android M and will feature Netflix 4K HDR and, eventually, Freeview Play.

The TVs will come with a redesigned remote: it’s still double sided with the QWERTY keyboard on the back, but the design is flatter, lighter and has an all-black finish.

Continuing with the 4K LCD range is the 6400 series, which features direct LED backlighting, Ambilight and support for HLG and HDR10.

It’s worth noting that each range will feature a different stand design, speaker configuration and finishes.

Last but not least, there are plenty of smaller screen TVs in Full HD and HD Ready resolution.