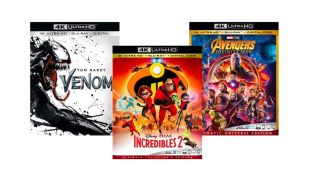 Amazon Prime Video, Netflix and even YouTube have toyed with the quality of their streams throughout Europe during the COVID crises and that leaves AV fans uncertain about the truth behind their 4K fix. The good news is that there are options for high quality video viewing without having to worry about throttled bitrates.

Even with the best of upscaling engines, most TVs over 50in in size are going to produce a pretty ropey image if they're force fed an SD-only diet. It might be time to consider getting back to the superior quality of physical formats or opt for paid-for rentals and downloads.

Below you'll find our pick of the best Blu-ray player deals as well as offers on 4K Blu-ray discs and some bargain 4K film downloads - high-quality entertainment regardless of your bandwidth.

Panasonic DMP-BDT180EB £79 at Richer Sounds
Vibrant colours, oodles of detail and a great sound? Sign us up! This cheap Panasonic HD Blu-ray player is a bargain at less than £75 and rock bottom for a disc spinner.View Deal

Panasonic DP-UB150EB-K 4K Blu-ray Player £130 at Zavvi
A budget 4K disc spinner with HDR10+ format support is hard to find - but clearly not impossible! This Pana player is now under £100, making it one of the most affordable ways to play back your 4K Blu-rays.View Deal

Panasonic DP-UB820 4K Blu-ray player £299 at Seveoaks
Panasonic's top of the range 2018 player has got everything you need. HDR-wise you're covered with Dolby Vision, HDR10+ and HLG. It's also a great choice for those with some serious surround sound as it supports 7.1-channel audio.

Dunkirk 4K Blu-ray for £16.99 at Amazon
Christopher Nolan's WWII masterpiece is a fitting cinematic treat to own on disc. It's a brilliant tale of an amazing and terrible moment in history told through the lens of individual stories. The sweeps or the wide open beach and dividing sea are 4K HDR heaven.View Deal

The Greatest Showman 4K Blu-ray £19.99 at Zavvi
One of the best family films of recent times, this is the kind of disc you can watch again and again without getting bored. Its grand, spectacular staging and choreography is perfect for 4K and makes for a brilliant sing-along option - hours of entertainment.View Deal

Planet Earth II 4K Blu-ray £11.99 at Amazon
Educational and utterly stunning in 4K, you'll get hours and hours out of this look at the jungles, mountains, deserts, islands, grasslands and cities of the world with the one and only Sir David Attenborough.View Deal

Captain America Trilogy 4K Blu-ray £33.14 at Amazon
Not one but all three of Marvel's Captain America films in 4K. That's the The First Avenger, The Winter Soldier and Civil War for £11 per movie. As one of the cleaner Marvel characters, it also make a reasonable family option for those with slightly older children.View Deal

Oldboy (2003) 4K - iTunes £2.99
This is one of the best films ever. Sure it'll be a remaster but it makes no difference. This is a cracking price to own an absolute cinema masterpiece. Forget the western remake. This film is a killer.View Deal

Baby Driver (2017) 4K - iTunes £4.99
Edgar Wright's super-slick, music-led getaway driver film is a treat for the senses. It has one of the best soundtracks around, it's packed with great action and characters, and is a proper no-brainer at this low, low price.View Deal

American Made (2017) 4K - iTunes £4.99
For fans of Narcos and Blow the story of Barry Seal is yet another lens on the drug trafficking politics of the 1980s. Tom Cruise's portrayal of the US pilot is impossible not to like - an easy watch, no matter your tastes.View Deal

John Wick: Chapter 3 - Parabellum (2019) 4K - iTunes £4.99
Not caught up with the latest installment of Hollywood's favourite hitman? It's a good time to grab John Wick 3. Just make sure you leave his dog alone.View Deal

Harry Potter & the Deathly Hallows 2 4K - Google Play £7.99
Harry Potters 5-8 have all been reduced down to £7.99 on the Google Play Store for those who'd like to own the saga in 4K. With all that on-screen dark magic of those later films, that extra detail goes a long way.View Deal