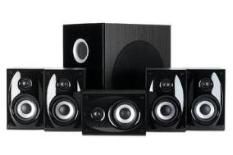 We love it when a plan comes together. And Teufel's plan – to sell its products exclusively through its website, resulting in cheaper prices for customers – is one that comes together just fine in our book.

The best news is that it actually sounds good, too. Play the epic gunfight scene from the Heat Blu-ray, and the five identical (and surprisingly compact) bookshelf speakers create a seamless surround field with well-defined and impressively steered bullet effects.

The subwoofer also integrates with the speakers very well, so vocals and effects that rely on the whole frequency range simultaneously are natural and balanced.

Sizeable sonics
Perhaps the Teufel's real success, though, is the size of its sound. We're not aware of any other sub-£500 system that can fill a room with big, meaty audio to the extent that the Teufel can.

Of course, nothing in this world is perfect, and the Theatre 80 does have its flaws.

The most obvious is that it's a little on the soft side: the percussion that accompanies the chase through the slums in Slumdog Millionaire lacks some of the drive and attack that other systems muster, and this has an effect on overall drama.

The sub is also a little tubby in the deepest bass, and occasionally bottoms-out when stretched, as it is by the flyover of Amitabh Bachchan's helicopter.

Still, even taking those flaws into account, we're keen on the Teufel Theatre 80. It's a mighty system for the money.