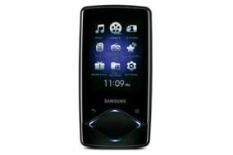 A score-draw snatched from the jaws of victory, thanks to the exasperating interface

Sometimes Samsung gives its designers too much leeway.

We're all for product differentiation but, when a company is as prolific as the Korean giant, the apparent need to distinguish its merchandise from every other manufacturer's – be it televisions, mobile 'phones or home cinema systems – can sometimes lead down a blind alley.

This YP-Q1, a nominal rival for Apple's all-conquering iPod nano and Sony's well-received NWZ-S639F, is a fine case in point.

For all its many positives (which we'll deal with, never fear), the Q1 has an Achilles heel – and it's purely a result of designers getting carried away.

Trigger-happy controls are exasperating
See that diamond-shaped area below the screen? That's a touch-sensitive control panel and, frankly, the word ‘sensitive' is too mild a description – ‘hair-trigger' would be more appropriate.

There's no certainty to any of the instructions you might attempt to give, especially if your fingers are broader than, say, cocktail-sticks.

In an attempt to produce something different, Samsung has succeeded only in producing an interface that doesn't work very well. That's a great pity, because in most other respects the Q1 is a very enjoyable machine.

The big display is bright and clear, and particularly impressive with video content – the Q1 is compatible with the BBC's iPlayer, so that's a big bonus.

Its FM radio reception and voice-recording facility are getting to be par for the course in machines of this size, but a raft of subway maps for the world's major cities is, as far as we know, a unique feature of at best questionable value.

Lose the 'phones for great, loud sound
Sound quality, too, is strong – or at least it is when you ditch the hopeless supplied headphones in favour of something competent.

The Q1 goes good and loud, by no means a given in MP3 players, and is a fast and energetic listen. Sweet Things' I'm In a World of Trouble sounds burly and precise, enjoying a spacious soundstage and impressively dextrous timing, with vocals well-integrated but distinct.

In fact, the Samsung seems able to cope with any style of music without fuss, and on a wide variety of file types too.

If you intend to load it with music, press ‘play' and keep well away from the control ‘diamond', it's easy to recommend