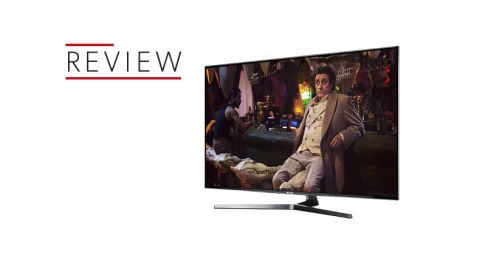 The relentless march of consumer technology has one underlying tenet: higher quality at a lower price.

Flying those words on its metaphorical flag is Samsung’s UE55MU8000, a LCD television offering a performance fairly close to that of Samsung’s premium QLED sets - but at a more reasonable mid-range price.

This Samsung has quite a reputation to live up to. Its televisions have amassed a number of What Hi-Fi? Awards over the past few years, and the company must be looking for a similar result in 2017.

The MU8000 has all the specs you’d expect of a 2017 television. It has 4K resolution, of course, but makes the most of that dense pixel count with HDR compatibility and Hybrid Log Gamma (HLG) too. It also has a claimed 1000-nit light output.

Combined with support for 10-bit colour depth, BT.2020 colour space representation and its DCI P3 colour standard, the MU8000 ticks all the boxes for a UHD Premium badge.

Missing from that spec list is Dolby Vision, which uses dynamic metadata to adjust the picture frame by frame, in theory giving an optimal picture compared even to HDR10.

However, only LG televisions have really embraced this technology up to now, so the Samsung isn’t alone in this omission.

The MU8000 has all the expected streaming services: Amazon Video, Netflix, YouTube and Now TV all pop up as little tiles at the bottom of the screen, managed by Samsung’s ‘Smart Hub’ user interface (known as Eden).

There are also the standard on-demand apps from the major UK broadcasters, including BBC iPlayer, ITV Hub, All 4, and My 5. On the music side, Spotify and Deezer are represented too.

The layout is easy to navigate – this is currently our favourite smart TV layout – and whether you’re using Samsung’s regular or smart remote, it’s a breeze getting where you need to be.

As is customary for more expensive Samsung TVs, the 8000 comes with a One Connect box to connect your sources to your television. This makes plugging in new devices easier and minimises cable clutter.

There are four HDMI sockets, three USBs, an ethernet socket for the most stable connection and an optical output to channel sound into your audio equipment.

And the cables connecting the TV to the One Connect can even be run through the stand, further minimising any mess.

When the TV registers a HDR source passing through, it immediately switches into a HDR preset that ignores any prior changes you may have made to the settings. For non-HDR sources, it stays true to the settings you currently have.

On detecting an HDR source, the MU8000 turns the Contrast Enhancer and Local Dimming options to maximum and switches on Motion Smoothing. We would leave the first two activated, but you might want to examine the motion processing.

The Samsung handles movement pretty well, but you might prefer it a little smoother - so our best advice is to see if it’s your cup of tea and make adjustments from there.

Once you’ve done that, the MU8000 will provide you with a picture that’s detailed and punchy from the bright whites all the way down to the darks.

Playing a 4K HDR disc Star Trek: Beyond through our reference Oppo UDP-203 Ultra HD Blu-ray player, we don’t even have to wait for the film to get started before the Samsung is flexing its muscles.

The metallic Paramount logo that swoops in, followed by a string of stars, has a clear glint to it and, even here, there’s a distinct sense of depth between the foreground and the background.

Once the movie gets under way, the contrast between the blackness of space and the blue light of the Enterprise’s engines give the picture a richness and vibrancy that’s impressive at this price.

When Captain Kirk addresses the tiny Teenaxian aliens at the start of the film, the way the MU8000 handles the highlights on his nose and cheeks is natural and sophisticated.

What’s more, this TV manages to strike a balance between vivacity in its colours and overcooked skin tones. Watching elephants stomping through the punchy, green grass in Planet Earth II is vivid and exciting.

Moving down to a 1080p Blu-ray of Avengers: Age of Ultron, the Samsung handles upscaling of the lower-resolution movie well - and retains a good amount of sharpness and insight to the picture.

There’s also a processing mode called HDR+ in the TV’s settings, which aims to make Standard Dynamic Range (SDR) content more like HDR – darkening the image and adding a touch more richness to the colours.

It can look a little odd on some material, but is still worth investigating.

Skipping to the scene when Iron Man and The Hulk come to blows, the MU8000 keeps up with the speedy camera angles and rapid action with relative ease.

Even the endless, mechanical wallops Hulk endures as Iron Man desperately tries to knock him out don’t faze this TV.

However, the MU8000 struggles a little with standard definition programmes and can be a tad too noisy at times. Putting on ‘Digital Clean View’ does reduce some of the flickering, so it’s worth a go.

Being an edge-lit LED set, you can see some clouding on the black bars above and below a 21:9 image as the television tries to light the middle of the screen, but that’s par for the course.

Viewing angles are also restricted, offering you less versatility than the similarly-priced Sony KD-55XE8596. If you’re inviting the family round to watch a flick, you’re probably going to end up in a huddle in front of the set.

This is no substitute for Samsung’s QLED sets, which offer greater subtlety, richer colours and more detail in their pictures, but the MU8000 still delivers a very satisfying performance considering its cost.

The midrange is clear and detailed – this is certainly the area where the MU8000 is most focused – but you lose out on some dynamism and insight across the frequency range.

The roars of The Hulk are lacklustre, and the Iron Man theme that kicks in when he appears is too restrained.

We recommend pairing this TV with a suitable soundbar – the Q Acoustics Media 4 or perhaps Sonos Playbar – to ensure audio quality matches the fine pictures.

Overall, there’s a whole lot to like about this Samsung television. The 4K HDR picture has a really punchy colour palette and lashings of detail - and it's easy to use.

With all those streaming services built in, you won’t be lacking for content either. Samsung’s competitors don’t have it easy.