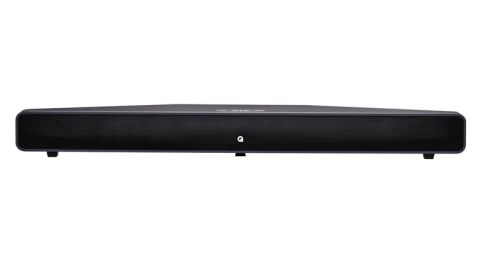 The Media 4 was Q Acoustics' first foray into the brave new world of soundbars, and a successful one at that, winning multiple Awards as one of our favourite TV speakers of recent memory.

The Q Acoustics Media 4, or ‘QM4’ as it’s referred to in the company’s literature, should be a good fit for 40in TVs and larger – it looks reasonably compact from the front, but the trapezoidal cabinet actually extends back around 14cm.

Using this shape allows enough room for a large elliptical subwoofer to sit in the back of the cabinet. A couple of 6.5cm BMR drivers (Balanced Mode Radiators) are the final pieces in this 2.1 soundbar.

The relatively simple, unfussy design is mirrored in the features and functionality on offer. Some may be disappointed by the lack of HDMI inputs – this means you have to connect all your kit into the TV, and then run a digital optical cable (supplied in the box) from the back of the set into the QM4 soundbar.

On the plus side, you do get aptX Bluetooth support and the convenience of near-field communication (NFC) pairing, which works with compatible smartphones and tablets.

There’s also a pair of analogue RCA inputs and a single 3.5mm socket should you want to connect any extra sources.

Elsewhere, a wall-mounting bracket is included in the box and there's a small, plastic remote, which handles very basic controls.

Unlike many rivals around this kind of money, the Q Acoustics Media 4 doesn’t have any optional sound modes or pseudo-surround options with which to experiment, but in all honesty, this isn’t a bad thing really.

In fact, the simplicity works in this soundbar’s favour, as the Media 4 just gets on with delivering excellent sound quality.

It’s a huge step up from conventional flatscreen sound, bringing the full-bodied, nicely rounded character we’ve come to expect from the company’s stereo speakers into a soundbar setting.

Play the last couple of chapters of G.I. Joe: Retaliation and, as our heroes gatecrash Cobra Command’s world summit and Roadblock blasts his way through the enemy tanks, the internal subwoofer gets to work.

It reinforces explosions and heavy gunfire with real weight and delivers the action with great gusto.

Compared with a rival product, such as the Yamaha YSP-1400 for example, you get less of a sense of sound-effects panning around you, but the Q Acoustics does a better job of delivering solidity and authority.

It manages to convey a real sense of excitement and drama.

And, even in the midst of all that on-screen action, the Media 4 keeps its composure.

Highs don’t sound bright or aggressive and dialogue doesn’t struggle, but instead manages to come across clearly, and when we play Eminem’s Without Me over Bluetooth the Media 4 shows a tuneful side to its character, too.

There’s a decent level of detail in the track and the soundbar’s powerful and agile bass keeps the music bouncing along.

Turn up the volume and the soundbar doesn’t flinch at the challenge, and at low levels there’s no shortage of detail or dynamics.

The Media 4 is just another excellent option from Q Acoustics in an already enviable product range. It’s sensibly priced and sounds fantastic.