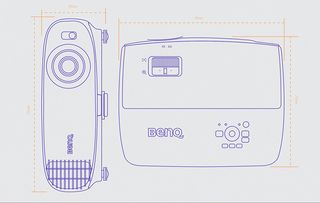 As an alternative to the television, projectors have long held a reputation for being expensive and complex. In their earliest days, when projectors relied on bulky and energy intensive CRT technology, this was often the case. But with the advent of DLP and LCD technologies, the projector has become an increasingly popular option that anyone can use, offering far larger screen sizes (100-inches and above) than possible with a standard LCD or OLED TV.

The difficulty has been finding a projector that can keep up with the latest 4K UHD TVs—which boast four times as many pixels as a full-HD 1080p TV or projector, more vibrant colours and deeper blacks—at a reasonable price. The first consumer 4K projectors hit the market at an eye-watering £25,000. Those have since dropped to £5000 at the low end, but that's still far above the price of even an OLED TV, where prices are as low as £1500 if you time it right during sales.

Fortunately, the first truly affordable 4K UHD projectors are now appearing, spearheaded by models like the BenQ TK800, which sports both a 3840x2160 resolution and high dynamic range (HDR) capabilities for a reasonable (comparatively speaking) £1200. You get a far larger screen than a TV for the price, upwards of 100-inches in the case of the TK800, which is better for cinematic viewing with friends, while the portable nature of a projector means it's easy to get set up in the garden on a weekend (UK weather permitting, of course).

Affordable 4K projectors are made possible by a bit of clever engineering using DLP (digital light processing) chips, which power many of the best projectors. For the first time in a long time, it's possible to look beyond the familiar flat-panel TV when kitting out a cinema setup—especially if you want a truly cinematic experience.

Why a projector instead of a TV?

There's another good reason to choose a projector over a TV, which is all down to the way our eyes deal with light. Whether it's CRT, plasma, LCD or so-called LED, each of these display technologies is defined as "emissive", meaning they involve beaming artificial light directly into the eye. Projections, on the other hand (whether it's a film projectors or a digital one), bounces light off a reflective surface (known as "transmissive")—the same way we see almost everything else in the world around us. Viewing angles are rarely a problem with projected video and the picture is often found to be more relaxing on the eye.

But what about those expensive bulbs?