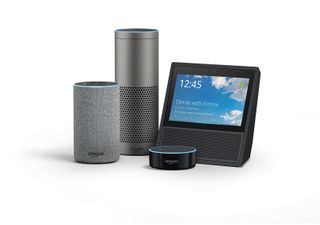 As the great predictor of trends in tech, the Consumer Electronics Show in Las Vegas has brought us the likes of the OLED television (now the de facto choice for premium picture quality), affordable drones, and yes, even those so-called hoverboards that went on to spontaneously combust the world over.

This year, CES turned Amazon’s humble home assistant Alexa into an all-encompassing AI presence as manufacturers demoed devices like smart fridges, air purifiers, and even baby monitors with the tech built in. While many of these products have yet to be released, Alexa integration continues unabated, particularly in home audio. If you’re shopping for a wireless speaker, chances are it’s got Alexa built-in.

Two of the best Alexa speakers have just been released. The UE Megablast and UE Blast are unlike other Alexa devices in that they’re properly portable, with their built-in batteries offering up to 16 hours of playback. Even better, they’re IP67 water resistant and covered in a robust rubber, making them ideal poolside companions. Built-in microphones allow you to use Alexa voice commands to set timers, ask questions, and of course, play music, so long as you have a nearby Wi-Fi connection.

Whether you stream your music over the Internet, or pipe it over Bluetooth or the built-in 3.5mm jack, the Blast and Megablast sound fantastic. The Megablast is the loudest of the two thanks to its larger size, but both pump out serious amounts of volume while remaining clear and distortion-free. The UE Megablast costs £269.99, while the smaller Blast goes for £199.99. That’s more than an Amazon Echo, but you get substantially better sound quality and portability in return.

The BPI, the UK music industry trade body, predicts that more than four million vinyl records will be sold this year, compared to 3.2 million in 2016. HMV believes it will see its biggest vinyl sales since the late 1980s, when most new releases were still put out on the format. So popular has vinyl become, that the indie labels that helped revive it are now being pushed out of surviving vinyl factories as major labels reissue the classics.

In a time when instant access to practically all the music in the world is as easy as tapping on screen, the vinyl revival might seem a little odd. But for new music fans, as well as nostalgic parents, there’s something magical about the physicality of vinyl and the artwork attached to it. That’s not to mention that the sound of vinyl is wholly unique, pops, clicks, and scratches included.

The success of vinyl has made getting into it much easier than in the past. Today’s record players, even cheaper ones, have built-in preamps that allow you to connect them directly to an amplifier or set of powered speakers without the need for a dedicated record input (some even have built-in speakers). Others have USB ports, allowing you to hook them up to a PC and digitise records for use with smartphones or smart speakers like the UE Megablast.

If you’re after an all-in-one solution, check out the ION Superior LP Bluetooth Wireless Turntable, which plays vinyl, CDs, cassettes (another format enjoying something of a renaissance) and has built-in Bluetooth, USB and speakers. It costs just £169.99. If all you need are the built-in speakers and USB, check out the ION Mustang LP Turntable, which mimics the classic style of 50s in-car radios for just £165. If your budget is a little more modest, the Lenco L-85 Turntable has a built-in preamp and USB for just £110.

Budding DJs or those that simply want a more robust turntable should check out the Audio Technica AT-LP120USB. It features a direct drive motor for faster stop and start speeds, adjustable tonearm weight for heavy scratching, pitch control for mixing, and a USB port for digitising records. It costs £249.99. There’s also the Audio Technica AT-LP3, which drops the DJ-friendly features but keeps the robust built and sound quality for £199.99.

As brilliant as it is to have access to all the music in the world, or an extensive record collection, sometimes all you want to do is flick on the radio and have someone else do the hard work for you. Fortunately, the humble radio continues to be popular, with hundreds of new models released every year that include not only DAB+ digital radio, but also internet radio.

The latter gives you access to thousands of different stations that play everything from million-selling pop ballads to the smallest of musical niches. There are also talk radio stations on all manner of different topics, should you not be in the mood for music. Best of all, radios are small, often portable, and extremely easy to use. With a few button presses you can be up and running and listening to music.

One of the best is the Roberts Stream 104, which supports DAB+, FM, and internet radio for just £91.99. There’s a large, clear screen for tuning in stations, while six AA batteries offer up to 20 hours of battery life. For something with a bit more oomph, check out the £149.99 Pure Evoke F3, which has a bright colour screen for tuning in stations, along with support for streaming services like Spotify. Its larger speaker pumps out 5W, making it ideal for busier households.

To find out more about home audio from the experts at Currys PC World, click here.