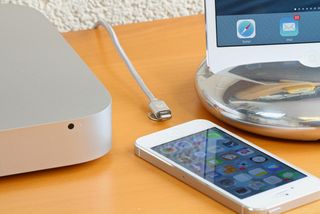 UK-based Woodford Design has launched its new cable for Lightning-equipped, 8-pin Apple devices, which has been fully certified by the Cupertino tech giant and is future-proofed against iOS updates.

The firm, which designs and manufacturers accessories for iPhones and iPads, is among a number to have taken to Kickstarter in recent months to successfully fund the development of its latest product.

Built using silver anodised aluminium, the 1m/3ft cable is woven for strength and to reduce tangling. It comes with a built-in cable tidy and is compatible with all Lightning-equipped 8-pin Apple devices.

After reaching its initial fundraising target of £10,000 in just five days, Woodford Design has now gone past its first stretch target of £15,000 that'll see two additional colour choices produced for the cable.

A second stretch target of £40,000 is now in place, with the Kickstarter campaign currently standing at £23,000 with 17 days to go. If that's successful, a charging indicator light will then be implemented.

It's anticipated that the first Quickdraw Lightning Cables will start shipping from August, with Woodford Design offering a cable to those who pledge £15 or more with free international shipping on top.

The success of Woodford Design's Kickstarter campaign comes after a number of other AV successes on the crowdfunding platform, including Neil Young's PonoMusic high-res music service.