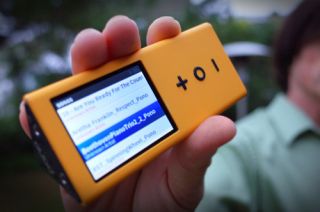 Just days after details started to emerge from the US about PonoMusic, a Kickstarter campaign to fund the creation of the high-resolution music service backed by musician Neil Young has started.

And it seems that the opportunity to reserve a PonoPlayer – the firm's high-res music player – has proved a hit, with the crowdfunding campaign reaching its $800,000 aim within its first day.

Of course, that doesn't mean you've missed your chance – you're still able to back the project until April 15th, as hitting its target simply means that the new PonoPlayer will become reality.

PonoMusic is billed as "an end-to-end ecosystem for music lovers to get access to and enjoy their favourite music exactly as the artist created it, at the recording resolution they chose in the studio".

The company says it'll offer ultra high-resolution music (192kHz/24bit), which it claims is 30 times more data from which the player reconstructs the audio file when compared with a standard MP3.

Music can be purchased from the PonoMusic.com Store, which will use the FLAC audio format for compatibility reasons. You can also use the PonoPlayer with high-res music from other sources.

In terms of the PonoPlayer itself, it's a purpose-built high-res audio player that features two output jacks – a normal mini-stereo output for headphones and a stereo mini-plug analogue output.

The former is intended for personal listening, while the latter has been specifically designed for a home or in-car audio system – or even with Sonos Connect.

With the PonoMusic app (Mac/Windows PC), you can visit the PonoMusic.com Store to search, purchase and download music. You can then sync your player with your computer via USB.

PonoMusic was founded by Neil Young back in 2011 and the team has now extended to include a wide range of expertise, including Semiphore Systems, Ayre Acoustics and AudioQuest.

The PonoPlayer will be built by PCH International and the company plans to start production late summer. The first PonoPlayers are expected to start shipping from October.

At time of writing, it's still possible to "pre-order" a PonoPlayer for $400 (plus $15 shipping costs if you're in the UK) but they're moving fast – so get yourself over to PonoMusic's Kickstarter page.