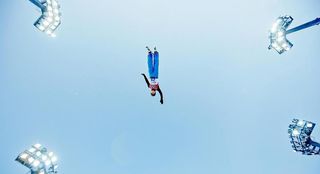 You can't beat a big sporting event when it comes to pushing forward TV technology - and the Pyeongchang Winter Olympics look set to be no different. The 2018 Winter Games, which begin on Friday 9th February, look set to deliver the largest ever live 8K production. Yes, we said 8K TV.

Not only that, the 8K video from Pyeongchang will also feature HDR, in what's claimed to be a world first for a broadcast of this scale. The IBC reports around 90 hours of content will be captured in 8K HDR using the HLG format, which was developed by Japanese broadcaster NHK and the BBC.

And yes, some people will be watching it. Just not many. NHK will be broadcasting the footage to a number of 8K theatres in Japan, and there will also be a theatre in the International Broadcast Centre showing the 8K feed.

As well as serving as a testing ground for future broadcasts, the 8K feed will be down-converted on site to provide the 4K HDR output for this year's event. This 4K video will be taken by a number of broadcasters, including DirecTV, the Dish Network and NBC in the US. DirecTV Is even serving its on-demand 4K HDR coverage with Dolby Atmos sound for those with the means (i.e. an Atmos speaker set-up or soundbar) to enjoy it.

As for the UK, the Winter Games are being broadcast in HD by the BBC and Eurosport. Will 4K pictures from the Winter Games appear on BBC iPlayer at some point? There's no word as yet. All we do know is that iPlayer is certainly where any 4K BBC broadcasts will appear - we might just have to wait for this summer's football World Cup for live 4K content (we hope).

So while we may have to wait to see the Olympics in all their glory, these tests can only be a step in the right direction when it comes to getting better quality TV broadcasts in our front rooms - whether that be 4K, 8K, HDR or otherwise.

2018 Winter Olympics to be made available in 4K HDR