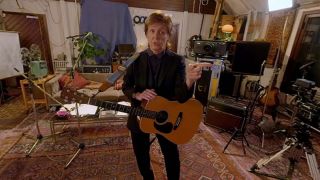 Dolby is teaming up with virtual-reality specialist Jaunt to release a series of virtual-reality films with a Dolby Atmos soundtrack. The titles will be available through Jaunt’s VR app, available for iOS, Android, Samsung Gear VR, Oculus Rift and HTC Vive.

Dolby says you won’t need any fancy headphones, but a regular pair of stereo headphones will be enough to deliver a multi-dimensional soundtrack to your ears.

Titles that will be available at launch include documentary series from Paul McCartney and Jack White. Cliff Plumer, president of Jaunt Studios said: “Over the past 12 months, we’ve been working closely with Dolby and leading filmmakers, musicians and brands to create a library of marquee titles leveraging the Dolby Atmos technology.

“We truly believe the high-quality immersive audio in VR is more than half the experience.”

MORE: Dolby Atmos - everything you need to know

While Dolby Atmos is making its way to virtual reality, DTS Headphone:X is making its way to smartphones for the first time. The Asus ZenFone 3 Ultra will be the first phone to get the technology, bringing with it 7.1 surround sound. The phone launches initially in Taiwan, but further markets have been promised. DTS says the Headphone:X technology “simulates the 3D environment of the audio’s original mixing stage”.

It goes on to say movies, music and games should “sound exactly the way the artist intended straight from your mobile device”.

DTS Headphone:X can also be found in the Asus ZenPad Z8 tablet, which has just launched in North America. A worldwide rollout is expected in the coming weeks.

MORE: DTS:X - everything you need to know

The BBC has been making headlines elsewhere with the launch of the new BBC+ app. Using the app, you’ll be able to receive updates on topics that are personal to you. Examples include the latest news headlines, trending TV shows, food and recipes, or recommended content based on your interests.

Clare Hudson, executive editor of homepage and BBC+ said: “By making BBC+ customisable, we are able to give users more relevant things to read, watch and listen to from across the BBC.

“This means you can use your spare moments well because once you’ve caught up on the day’s main events, you can browse articles from across the BBC on topics you’ve chosen yourself. It’s also an easy way to discover things you weren’t expecting to find, as everything in brought together in one simple app.”

The BBC+ is available to download free now on iOS and Android devices.

The man doing the hiring, George Ergatoudis, was once the BBC Radio 1 and 1Xtra head of music.

Netflix has announced its Q2 subscriber numbers - and they have fallen well below expectations. Netflix had planned to sign up 2.5 million new subscribers but recorded only 1.7 million. Following the news, Netflix stock fell by 16 per cent. However Netflix explained that, while it did in fact add the number of subscribers it had expected, it also lost a lot more renewals than had been forecast.

Reed Hastings, CEO of Netflix, put some of the blame on the media in the way it reported Netflix’s planned monthly subscription price increase. He said customers became confused and cancelled subscriptions before the price increase came into effect.

Hastings still believes Netflix can grow to 60-90 million subscribers in the US alone and he says Netflix isn’t losing as many subscribers as rival services such as Amazon or Hulu.

Roth has announced the Sub Zero III soundbar that is claimed to deliver high-definition audio with clarity and power, without the need for a separate subwoofer. Roth says the Sub Zero III has a frequency range of 40HZ - 20KHz thanks to Ultra-Bass passive, bass and full range drivers, and 90 watts of amplification.

Roth says it has designed the Sub Zero III to be as practical as possible, so it should fit under most TVs either on a surface or wall-mounted. The Roth Sub Zero III is available now for £150.

See all our Roth reviews

Roberts has given its Revival DAB radio a makeover for the summer, with Fuchsia Pink and Cobalt Blue finishes now available. Everything else about the Revival remains the same, including 120-hour battery life, LCD display, auto tune and the iconic fifties styling. Both new colour finishes are available now, at £180 each.