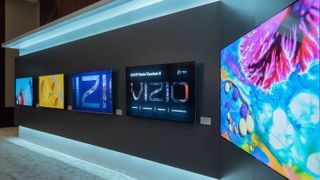 Vizio has announced that its latest 4K TVs are now available to buy, with the new models boasting improved brightness and more local dimming zones. Vizio has also promised that Apple's AirPlay 2 and HomeKit will be coming to both old and new Vizio TVs in the near future.

Top of the newness pile is Vizio's flagship P-Series Quantum X, a 4K HDR model available in 65-inch and 75-inch sizes. Vizio believes the P Series Quantum X TVs will compete at the top end of the TV market, and at $2,200 for the 65-inch and $3,500 for the 75-inch, these sets mark a change from the typical budget Vizio TVs.

Vizio has reason to be confident, with the quantum dot displays featuring 384 or 480 local dimming zones, approaching OLED TVs in terms of black level, and potentially beating them for brightness, with up to 3,000 nits of peak brightness in the 65-inch model.

If you associate Vizio with more palatable price-points, there's a P-Series Quantum (without the X) available in the same sizes, which starts at $1,400 for the 65-inch model, if you don't mind settling for 1,200 nits of brightness and 240 local dimming zones.

There are also – confusingly – two Vizio M-Series ranges in 2019, with the less expensive of the two coming in at $900 for the 65-inch model. It still has a quantum dot display, but far fewer dimming zones (20 maximum) and only 400 nits of peak brightness.

Finally, the entry-level Vizio V-Series has no quantum dots or local dimming, but you'll still get Dolby Vision and HDR10 – and they're only $600 for the 65-inch model or $450 for the 55-inch TV.

With a Smartcast 3.0 update, you'll finally be able to organise the row of streaming apps on your TV's home screen, so you can keep Hulu and Vudu as far apart or as close together as you please.

Vizio also announced that Apple's AirPlay 2 and HomeKit are coming at some point this summer, so you'll be able to stream from Apple devices and connect to other compatible smart platforms.

Best Vizio TVs: Are they any good? Which are the best deals?