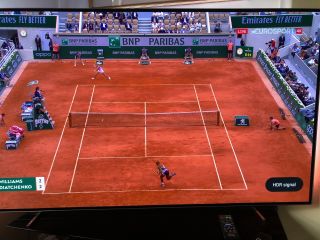 It's being shown on the Eurosport channel - by pressing the red button on the remote control when watching Eurosport 1HD (channel 521), Eurosport 2HD (channel 522) or Virgin TV Ultra HD (channel 205 and 999), viewers will then be switched to the 4K HDR broadcast, provided they have the V6 cable box and a 4K/HDR-compatible TV.

Virgin is using Hybrid Log Gamma (HLG) technology for the broadcast, so your 4K TV will need to be compatible with that HDR format to get the full benefit. Standard 4K viewing of the broadcasts is also available.

Eurosport’s live 4K HDR coverage will be available on each day of the two-week long tournament on all matches that appear on the Phillipe Chatrier court.

“We are upping our game once more this summer by broadcasting one of the most prestigious tennis competitions in the highest picture quality currently available,” says David Bouchier, Chief Digital Entertainment Officer at Virgin Media. “Our customers will be able to get even closer to the action with HDR technology on our V6 box bringing the action right into the homes of our customers.”

Last year Virgin Media and Sky Q broadcast the French Open in 4K UHD (but not HDR) for the first time. The BBC has also trialled 4K HDR broadcasts on iPlayer, including this year's FA Cup final.

BT recently announced that it will be broadcasting the Champions League Final in HDR but we're still waiting for HDR to arrive rival platform Sky Q. It was initially due to arrive in late 2018, but has been put back to later this year.