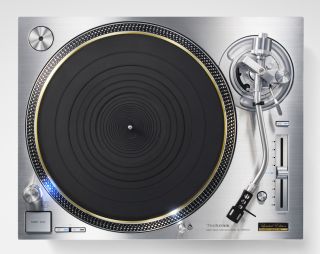 We first caught a glimpse of a new Technics turntable during IFA 2015, but then it was just a shell of a deck. Now, all the pieces are in place, and we have to say things are looking very promising.

The SL-1200G is the cherry on top of Technics' high-end Grand Class G30 range of hi-fi separates. The model name is a nod to Technics history and its iconic SL-1200 range which spawned the classic SL-1210 deck.

It's due out this summer - but it won't be cheap, with Technics telling What Hi-Fi? it will cost around $4000. The previous Technics decks would retail for around £1200, but Technics says this new deck is completely redesigned and, naturally, a real jump in performance.

Panasonic claims the new deck uses a number of unique features designed to keep vibrations of the motor and any changes in rotational speed in check.

There's also a 50th anniversary special edition in the offing, the SL-1200GAE, which features a slightly different finish, limited serial number platter and a magnesium tonearm (as opposed to aluminium on the standard model). This model will be limited to 1200 pieces.