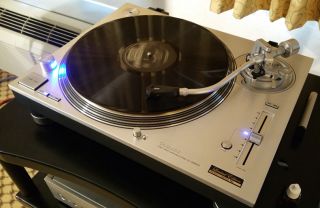 The new Technics SL-1200 turntable has been attracting plenty of attention since it was announced back in January. But alongside the excitement, in hi-fi and DJ circles alike, there were also plenty of raised eyebrows, mainly about the price tag.

Speaking to What Hi-Fi? at the Bristol Sound & Vision Show, Technics CTO, Tetsuya Itani, explained that the new deck was a complete redesign, requiring a brand new manufacturing process, using all new tools - and this made for an expensive turntable.

Confirming the $4000 price tag would likely translate to “a little under £3000" in the UK, Itani revealed that the price of the new SL-1200 had been a big issue for Technics, too. “The cost was the biggest problem for us, from the start of the project.

"Because the original 1210 turntables were manufactured for so many years, the manufacturing process had got to a very low cost. Now we need to invest in all the tools again, and the price now is much higher than the 1970s.”

And there’s a reason Technics had to invest all over again: none of the old tools and machines were available, having been destroyed or badly damaged. So Technics had no choice but to design the new deck from scratch. And this was no bad thing, said Itani.

MORE: The best new turntables from the Bristol Show 2016

"We began to study just a few months prior to IFA, maybe summer 2014, for the new SL-1200. We learned that it was impossible [to make the same deck], as almost all the tools for manufacturing were gone or heavily damaged - only one "die" remained, and that was for the dust cover.

“All the documents were kept, all the drafts… but it was not the Technics way. If we have a chance to start from scratch, we should. With new technology, new theory - that is this guy [the SL-1200G]. So it’s a new model from scratch.

“Everything is new… except for the dust cover. The weight of the platter is nearly 3 times the old '1200, and we also have a new motor, which is a very important point of the new model. The feet too. It’s heavy, the old 1200 was more plastic.”

And Itani knows the performance needs to justifty the price tag.

“Every part is designed for better sound quality. We are thinking of course it is a 1210…. but performance wise it’s SP10 MKII level.” The Technics SP10 MK II was an expensive, heavy duty hi-fi turntable that launched in the mid-1970s.

But if you’re not ready to part with the best part of £3000 for a new Technics turntable, could there be a more affordable SL-1200 on the way? Following some nervous laughter, Itani replied: “Right now, we start thinking [about a more affordable model]. But not definitely right now. We need to study,” said Itani with a smile.

In the meantime, the limited edition SL-1200GAE is on target for a June release but the regular SL-1200G is looking at a “winter” release date. No surprise, with Technics confirming the model being shown is “still pre-production. There are a few more things to change, it will get better.”

We look forward to hearing the finished article...