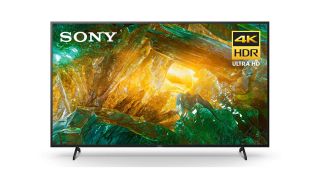 Following the unveiling of its 2020 4K LCD TV line-up at CES 2020 last month, Sony has now revealed pricing for most of the forthcoming models.

Sony has chosen to delay unveiling the prices of the rest of the range (55in, 65in and 75in), and we also await figures for the entry-level X750H (XH75) series, which comprises 55in and 65in variants.

Of course, we are also patiently waiting for price tags to be hung on its 2020 OLED TVs and 8K TV too.

The Sony XH950 range features full-array sets with local dimming that use Sony's near-flagship 4K HDR Processor X1. On the 55in models and above you'll find Sony's new X-Wide Angle tech, designed to maintain picture quality at all viewing angles, as well as Acoustic Multi-Audio – a bi-amp audio system that controls a main speaker and 'invisible' tweeter separately.

All the top-end bells and whistles are onboard: Google Assistant and Amazon Alexa voice control, support for Dolby Atmos, Dolby Vision and IMAX Enhanced, Netflix Calibrated Mode and a whole host of smart apps, such as Netflix and Amazon Prime.

The X800H range mimics many of its sibling's specs but does without the full-array backlight, X-Wide Angle and Acoustic Multi-Audio technologies.