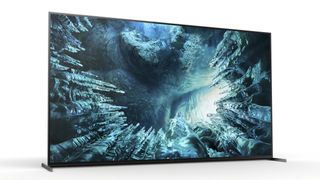 Sony has focused its CES 2020 TV line-up on making its top panel technologies available through as much of its range as possible.

Sony's top-end OLEDs should also now be within the reach of more customers with the launch of the 48in model of the Master Series TV, the Sony KD-48AH9. Again, there's no pricing for the time being but expect it to come in at much less than the 65in AG9 from 2019.

The 8K ZH8 features Sony's top-of-the-line Picture Processor X1 Ultimate and 8K X-Reality PRO engine for 8K picture production. It comes in both 75in and 85in sizes and has a tweeter built into the frame of the set turning the panel itself into speaker.

The ZH8 is 4K 120fps compatible for gaming, has a backlit aluminium remote and a two-position stand to accommodate small cabinets.

Sony has also announced that its 2020 collection of OLEDs will come with its class-leading X-Motion Clarity motion processing technology for the very first time. Like the ZH8, the 55in and 65in Sony A8 4K OLED TVs are powered by the Picture Processor X1 Ultimate, as is the 48in Sony A9.

All the sets above feature Sony's new Ambient Optimization technology which is designed to automatically control the picture brightness and sound output according to the customer's environment. They're all AirPlay 2-enabled so that you can stream direct from iPhones and iPads, and Sony has stuck with Android TV for the OS.

There's no place anywhere in the line-up for HDR10+ but Dolby Vision is, of course, supported throughout. The 2020 A8 and A9 OLEDs do have a suite of HDR features, however, which include object-based HDR remastering and Sony's dual database processing.

As we head down to the 4K LED TVs, the 2020 Sony line-up follows a similar pattern to the 2019 Sony TVs but with more of the upper-end tech spread throughout.

At the top end is the Sony XH95 range which comes in 85in, 75in, 65in, 55in and 49in models. It feature the processing and HDR features from the OLEDs above as well as local dimming.

The big bonuses, though, are the X-Wide Angle abilities, which maintain a strong picture at all viewing angles, and the improved Acoustic Multi-Audio, Sound-from-Picture concept: a bi-amp system, which controls the main speaker and invisible tweeter separately, and an X-Balanced Speaker which fits into the slim design.

For all the stops, opt for the 55in and above models which have a bezel-less look and the full audio options.

The Sony XH90 TV range loses the 49in size and drops down to the lower spec 4K HDR Processor X1. They're still full-array sets with local dimming and come with the Acoustic Multi-Audio with X-Balanced Speaker. Their design is no longer quite bezel-less but the frame is diamond cut for a slim look. They will also be 4K 120fps compatible via a future software update.

Beneath these, the TVs lose their full-array LED status, beginning with the two Sony XH85 models, 49in and 43in. The physical design changes again and there's no Acoustic Multi-Audio features.

And then at the bottom of the pile are the Sony X70 4K TVs. While they support Dolby Vision, they don't have the same HDR control options. There's no X-Balanced Speaker nor any mention of the Android TV OS or AirPlay connectivity. They come in 65in, 55in, 49in and 43in panel sizes.