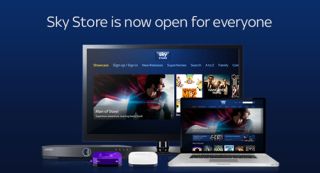 Users will be able to access content through a browser on their PC, laptop or Now TV box. Additionally, the service is now available through Roku and YouView set-top boxes.

Rather than stump up for a monthly subscription, like with services such as Netflix and LoveFilm, users pay as they watch, in a similar fashion to Tesco's Blinkbox service.

Films are being offered from as little as 99p, for titles such as Austin Powers. Other titles, such as The Godfather, are available for £1.99, and new releases like Despicable Me 2 can be rented for £3.49.

Once a film is rented, it will stay in the user's account until it is played. It will then be available for 48 hours once playback is started.

Sky has promised that other big releases such as Captain Philips will be available to stream in the new year.

Currently, Sky only has around 1200 titles in its catalogue, compared with the 9000-strong offering from Blinkbox.

Sky is also working on bringing the service to mobile devices as soon as possible, to let users stream on the go.

The company has recently been strengthening its other services, announcing that it has added the ability to download On Demand content to a Sky+ HD box from the Sky+ app.