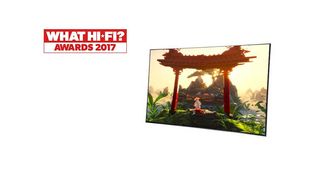 The TV is the beating heart of almost every lounge, so it’s little surprise that the televisions category of the What Hi-Fi? Awards is always one of the most hotly contested - and 2017 is no exception.

In fact, this is arguably the most important year for TVs in absolutely ages, with multiple manufacturers producing OLEDs for the first time and Samsung taking a brazenly combative stance with its QLED range.

Ultimately, 2017 is OLED’s year, with LG’s OLED55C7V winning at 55in and Sony’s KD-65A1 (which is based on an LG OLED panel) taking home the premium 65in TV prize. These are both extraordinary televisions, and absolutely the TVs you should go for if you’ve the money and the space.

But what if you’ve got the space but not so much of the money? You’re covered, too, because the Samsung UE65MU7000T is another 65in Award-winner, but in the under-£2500 price category. Naturally, this is a bit of a step-down in quality compared to the Sony A1 - but you’re still getting a huge telly with a performance and spec-list that's genuinely superb for the money.

49in is steadily becoming the most popular screen size in the UK and - seeing as OLEDs don’t go that small - Samsung may well have thought it had the 49in Award wrapped-up. Sony had other ideas, though, and the KD-49XE9005 is a real belter that pleases on almost every level.

Samsung has, though, taken both of the remaining Awards, thanks to the UE40MU6400 and UE32M5500 - they both offer terrific performance and excellent value at 40in and 32in respectively.

So that's two TV Awards for Sony, one for LG and a whopping three for Samsung. But which one of these fabulous models will win the ultimate prize, the Television Product of the Year 2017? Tune in on the evening of 15th November to find out!