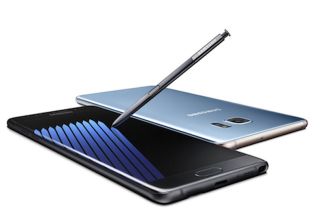 Following the announcement of the iPhone 7 and iPhone 7 Plus as the first major phones to lack the standard 3.5mm headphone jack, Samsung is reportedly set to follow suit.

Digital Music News reports that Samsung is now "actively and aggressively" pursuing its own proprietary headphone connection, which it could also refuse to license to Apple.

The move could mean Android and iOS phones ultimately end up with two different, incompatible headphone outputs, neither of which work with existing headphones that use the 3.5mm jack connection.

The report suggests Samsung is working on a new connection that isn't USB-C. This new USB connection has appeared on some recent Android phones in place of the standard 3.5mm jack, notably on the Motorola Moto Z and Moto Z Force. The OnePlus 3 sports a USB-C connection and a 3.5mm headphone jack.

While Apple opted for its own Lightning connection on the new iPhones, it also made plenty of noise about its new wireless earphones, the AirPods. Naturally Samsung could also be looking to push users towards wireless headphones (see our photoshopped image above for how it could look).

Either way, it looks like the headphone market is in line for a serious shake-up...