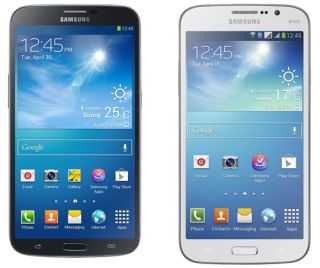 The Galaxy Mega 5.8 meanwhile, the “more compact version”, boasts a not too inconsiderable 5.8-inch screen.

Samsung state that despite its size the Galaxy Mega will be relatively light (199g for the 6.3-inch version). If you can grip the thing that is.

Running Android 4.2 Jelly Bean, the Samsung Galaxy Mega 6.3 and 5.8 are powered by dual core processors (1.7Ghz and 1.4Ghz respectively), the 6.3 coming with the option of 8/16GB hardware configurations with the 5.3 providing only 8GB storage. You do have the option of adding up to 64GB of storage via the microSD slot.

Samsung Galaxy Mega: better battery life
Interestingly Samsung’s press release made note of the devices’ “advanced software”, which claims to use the processor more efficiently and allow for improved battery life. Much has been made of the Samsung Galaxy S4 processor, which comes in two versions, one for the US and one for the UK.

Samsung also highlights a number of features on the Galaxy Mega phones. Group Play enables content sharing for up to 8 devices on the same wi-fi network, with WatchON turning the phablet into an IR remote controller for a “richer TV experience”.

Samsung Link streams photos, music, videos and other multimedia content between devices and ChatOn shares what’s on your screen with friends.

Due for release in Europe and Russia in May, no price has been mentioned as yet as Samsung looks to gradually roll out the release of its new handsets over the coming months.

While they may be bigger, it seems unlikely the Galaxy Mega phones will overshadow the imminent launch of the Samsung Galaxy S4, the latest in Samsung's phenomenally successful Galaxy S range of phones.