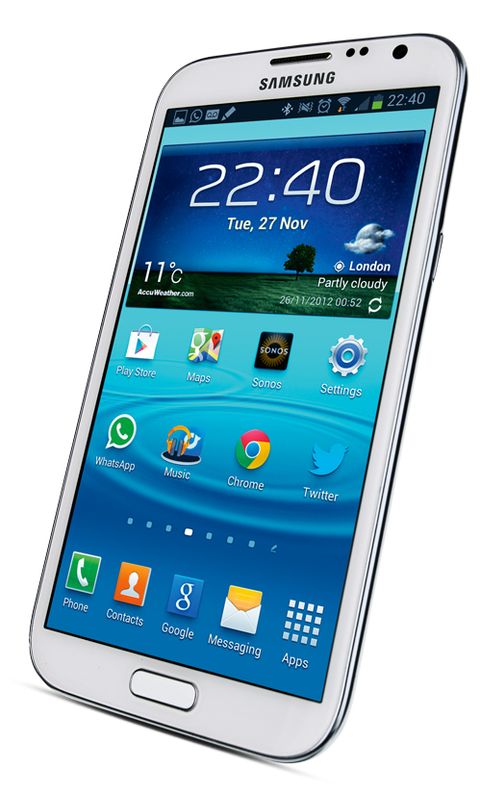 Around the time many people were starting to think that smartphones were getting a little too big for, well, our pockets, Samsung laughed in our faces and released a monster phone-cum-tablet, the Galaxy Note.

While we’re still loath to use the term ‘phablet’, we are prepared to say that the Note won us (and many of you) over. So it’s now no surprise to see a Samsung Galaxy Note 2.

The Galaxy Note 2 brings the big brother of the Galaxy range in line with Samsung’s Galaxy S3 both in terms of design and the Android OS experience. The screen is – wait for it – even bigger. It measures 5.5in, as opposed to 5.3in on the original Note, making for a taller and marginally heavier device, though it is slightly narrower and slimmer.

The Super AMOLED screen has a lower, 1280 x 720 resolution (the original Note was 1280 x 800), which seems strange on a bigger display, making for 267 PPI. The processor has been boosted to a 1.6 quad-core model however, and thankfully the battery has followed suit – it’s now a 3100mAh affair, making it longer lasting.

The OS is Android 4.1, Jelly Bean, and comes updated with original Samsung features such as Smart Stay, which keeps the screen on as long as it detects a face in front of it.

The trade-off in our minds is Samsung’s insistence on pre-loading bags of software and apps that most people will probably do better without.

One thing we think Samsung has got right is the feel in the hand. It’s as comfortable as such a big phone could be thanks to the light, slim specifications and the sensible placement of the buttons, which are in reach but out of the way of where you hold the phone.

Of course, the Note 2 is at its best when making the most of the screen. Browsing the internet, there’s simply much more information at your fingertips thanks to the extra inches, while text is that much easier to read.

Switch to video and while it’s similar in character to the S3, it can’t match its smaller sibling for sharpness or overall punch. But it’s still colourful, detailed and comfortable to watch. Sonically it’s strong, delivering music with decent punch and detail, sounding full-bodied.

The S Pen input tool is better, and has some neat new features – the note app pops up when you pull out the stylus, for example – and it will appeal most to those whose text input skills aren’t as finely honed as some.

There’s a heck of a lot here in every sense: from the huge screen to the wealth of features, from S Pen to S Voice. And most of it hits the mark.

For all this, the Galaxy Note 2’s size will no doubt be the, well, biggest aspect for most people to think about. But you can rest assured that if you do want that big screen, everything else this smartphone offers is more than up to scratch.