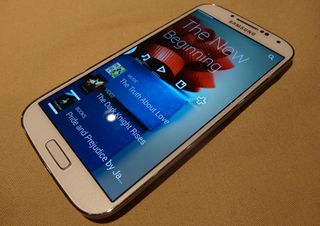 The Samsung Galaxy S4 phone is official. And we've had a chance to get a hands-on review, a look at the new features, take some pictures and get all the information, release date and specs on the new Samsung Galaxy S4 (or Galaxy SIV if you prefer).

Samsung Galaxy 4: everything you need to know

The weight of the Samsung Galaxy S4 is 130g, compared to 133g on the S3, and it certainly feels light. Available in black mist or white frost, it looks a more premium product than the S3.

However, the familiar plastic casing on the rear of the device is still present and correct, sure to divide opinion, but the phone itself feels much more sturdy. There's a mottled effect to the rear casing on the Galaxy S4, too. That said, side by side, the S3 and S4 do look very similar.

At first glance it looks bright, sharp and vivid, with a similar colour palette to the phenomenally successful S3. No bad thing, then.

WIll be colours be the most accurate? We'll have to wait and see but there was a hint of over-saturation to some colours, as we have seen on some Samsung screens in the past.

The Samsung Galaxy S4 has 2GB RAM, a 13MP camera with 1080p video support and a 2MP front-facing camera. Samsung was keen to emphasise the importance of the new camera.

The Galaxy S4 will be available with 16/32/64GB memory options and there's an SDcard input to for adding up to 64GB more storage space.

Slightly confusing there are two Samsung Galaxy S4 models, with different processors, 1.9GHz and 1.6GHz. The UK model will be the 1.6GHz Exynos 5 Octa-core processor.

It's worth noting that this will function as 2 sets of Quad-core processor, which the S4 will flip between when necessary for more complex tasks.

How this will affect performance remains to be seen, with the Octa Core processor always set to work as two Quad Cores rather than the full Octa Core experience regardless.

The Galaxy S4 ships with Android 4.1.2. OS, complete with Samsung's TouchWiz UI over the top. The usual screens and apps are available and Samsung has made more of them instantly available via an upgraded pull down menu.

Samsung grouped a lot of the most exciting new features of the Galaxy S4 under the 'Convenience' header, bringing Air View and Air Gesture hands-free control, and eye-tracking technology in the form of Smart Pause and a tilt control feature called Smart Scroll.

Air View allows you to hover your finger over certain content to get a pop-up preview. This works on videos, allowing you to scroll ahead to different parts of the video and see a preview, view email contents without opening the email or preview calendar appointments without having to click through or even touch your phone.

Air Gesture meanwhile, also building on a feature on the Galaxy Note 2.0, allows you to skip tracks, accept phone calls and other tasks by swiping your hand over the screen, Jedi-style.

Both proved pretty reliable in our quick hands-on review of the Samsung Galaxy S4, though you couldn't move your hand too fast on Air Gesture while AirView sometimes took a few attempts. It wasn't clear whether the software we had on our handsets was finished, however.

The new features could prove very handy if your hands are dirty and you want to skip a track or answer a call.

Smart Pause is the much leaked idea that when you look away from watching a video the video pauses. It then restarts when you look back. Again, our quick review of this feature worked well.

Smart Scroll doesn't track your eyes but instead allows you to simply tilt the screen up or down to scroll up and down a web page.

This seemed to work fine but also seemed prone to scrolling when we didn't necessarily want it to do so. A much longer review will be needed but it will be interesting to see how this feature works out.

The enhanced camera seems crucial in Samsung's eyes. It borrows much from the Samsung Galaxy Camera, incorporating that device's interface.

A host of new features include Dual Camera, Dual Shot and Dual Recording, allowing you to use both cameras at the same time to make montage pictures, record picture in picture and more.

Eraser Shot also caught our eye, allowing you to remove blurry objects or indeed people from background shots. Cinema Photo also allowed you to make your own GIF-style images. We look forward to reviewing all these features properly in time.

Samsung has integrated all of the content in one place. Music, movies, books and more are all now in a newly designed Samsung Hub. And it looked very good. Sound quality will have to wait and see but video quality certainly looked excellent.

Another new feature is Group Play, which allows you to connect multiple Galaxy S4 devices (should you and all your friends choose to buy one...) and play music simultaneously on all devices for a "surround sound" effect, in Samsung's words.

You can also use Group Play to play music in "stereo mode" with two Galaxy S4 devices. The speakers will have to be better than the average for us to get too excited about this however.

We will be intrigued to see how the sound and video performance compares to the iPhone 5 and Nexus 4. You can see the form side-by-side below.

Samsung seems to be pushing its new fitness app, S Health. It looks very similar to the likes of Runkeeper and MiCoach, having built-in GPS, a pedometer, tracking walks and runs. It looked slick though naturally we didn't have time to take it for a spin.

Blutooth accessories are coming, with many focused on syncing with this app. The S Band is a wristband that can track GPS - for when you forget your phone - and then sync your details to your phone's S Health account.

As you'd expect, the Samsung Galaxy SIV is pretty well-stacked in terms of connectivity. As well as 4G LTE, there's WiFi, GPS, NFC, Bluetooth 4.0 with aptX and more.

It comes in 16, 32 and 64GB incarnations, which is about as big as we'd expect, and also comes with an SD card so you can boost it a further 64GB. Storage shouldn't be a problem.

The Samsung Galaxy S4 price has been confirmed as £629.95 with the release date set for April 26th in the UK.

You can buy the Galaxy S4 from Amazon or Carphone Warehouse without a contract (SIM only) for £629.95, or cheaper if you sign-up for a contract from the likes of EE, O2, Orange, T-Mobile, Three and Vodafone.

You can get the Galaxy S4 for as little as £20 if you're prepared to pay £61 per month on contract with T-Mobile, or around £270 if you'd rather pay a more affordable £31 per month with 4G network EE.

It's obviously hard to form a solid opinion after such a brief time with the device: we look forward to getting some quality time with the Samsung Galaxy S4 and a chance to see the music and video performance up against the likes of the iPhone 5, Sony Xperia Z, HTC One and Nexus 4. There's no doubt that the flagship phone market is hotting up nicely again.

As Apple found, it's now getting harder and harder for Samsung to make big changes with each iteration of the Galaxy S phones. It's evolution not revolution.

That said, there are plenty of new features, such as the hands-free Air View and Air Gesture, and the clever Smart Scroll and Smart Pause. The device looks better and feels better, albeit still in a similar chassis (yep, that back cover is still on the flimsy side), and the screen looked excellent up close and personal.

Look out for our full Samsung Galaxy S4 review and verdict very soon. Let us know what you think in the comments below.