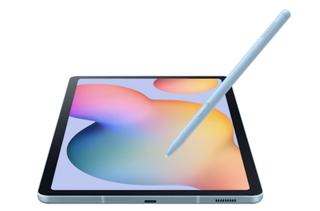 Samsung has announced UK availability for its new Galaxy Tab S6 Lite Android tablet. The affordable, 'Lite' version of the 2019 Galaxy Tab 6 is available for pre-order from today and is launching in the UK on 30th April. A launch date for the US and the rest of the world hasn't been announced, but we do have plenty of details – including pricing.

Boasting generous screen space, a thin and compact body and a redesigned S Pen included in the box, the Galaxy Tab S6 Lite is an Android option surely aimed at the Amazon Fire HD 10 market – and at the price, it's pitched right against the Apple iPad 7th Generation too.

For that, you'll get the Galaxy Tab S6 Lite and the new updated S Pen in the box, too. Battery-free and weighing only 7.03g, the new S Pen promises improved latency and a 0.7mm pen tip to deliver greater precision when note-taking and drawing. And when you’re finished with it, the S Pen snaps magnetically onto the side of the tablet, or to the optional book cover case.

The battery on the Samsung Galaxy Tab S6 Lite is 7,040mAh, which Samsung claims will stretch to 13 hours of video playback or 12 hours of internet use.

The front-facing camera on the tablet is 5MP, which goes up to 8MP for the back snapper, and while neither of these rival the options you'd get with Samsung's non-Lite lineup, they'll probably suffice for video calling.

In the sound department, the Galaxy Tab S6 Lite includes dual speakers with sound by AKG and Dolby Atmos. Samsung has even partnered with YouTube and Spotify so that from 30th April, Galaxy Tab S6 Lite users can enjoy ad-free YouTube videos, the ability to download and watch videos offline and access to YouTube Music and YouTube Kids, via YouTube Premium free for 4 months.

The new 10.4-inch Galaxy Tab S6 Lite is equipped with the latest version of One UI, an interface optimised for the larger tablet screen which promises a more intuitive visual experience and simplified navigation tools. Talking of screen, the Tab S6 Lite has an LCD display, not OLED, with a resolution of 2400 x 1200 pixels.

Available in Oxford Grey and Angora Blue with a matching S Pen, the Galaxy Tab S6 Lite certainly looks like a stylish companion.

Living in the States and looking for a smartphone rather than a tablet? You're in luck. The Samsung Galaxy S10 Lite (which we've been promised since CES) is finally on sale in the US, which means it can't be long before it's available for the rest of the world.

If you're on the market for a new mobile phone, today might be an ideal opportunity to nab a bargain from your couch...

See all our Samsung Galaxy reviews