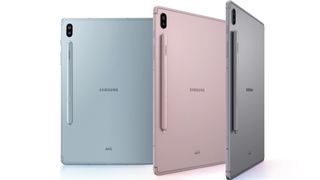 Samsung has unveiled the Samsung Galaxy Tab S6 tablet ahead of its Unpacked event which takes place in New York on 7th August.

This latest in the line of Samsung’s stylus-based big-screen tablets, it comes with a 10.5in WQXGA, 2560x1600, Super AMOLED display, which boasts a 287ppi pixel density and 16:10 aspect ratio for movie-watching fun. While not quite 4K, it still manages to record 4K footage and even playback 8K material (downscaled by the screen) both at 30fps.

Like most of its recent premium mobile devices, AKG has tuned the four internal speakers and there’s also Dolby Atmos support as well. Sadly there’s no sight nor mention of a 3.5mm headphone jack anywhere.

The Samsung Galaxy Tab S6 tablet measures 244.5 x 159.5 x 5.7mm, weighs 420g and comes in a choice of Mountain Gray, Cloud Blue and Rose Blush. There are 6GB and 8GB RAM versions with 128GB and 256GB of storage respectively. There’s also a microSD card slot for a possible extra 1TB of storage.

It’s a tablet designed for both work and play thanks to the included Bluetooth-enabled S Pen stylus and software, which can convert your handwritten notes to Word and PDFs. The S Pen can also perform gesture controls called Air Actions as well as take selfies, shoot videos and control media playback. It also promises to be great for sketching too with its 4,096 levels of pressure sensitivity for different kinds of pencil and brush strokes.

To boost the productivity angle, there’s a keyboard accessory and an improved version of the Samsung DeX software which allows you to dock the device with a monitor for a full PC-like experience based on its Android Pie OS. The 256-bit encryption Samsung Knox security should also be enough to keep all your files safe and sound.

Inside, it’s as 7nm 64-bit octa-core processor at work with a 7,040mAh battery which is stated to last 15 hours per charge. There are LTE and Wi-Fi versions of the Tab S6 but no pricing or availability has been announced just yet.

Finally, there are two microphones as well as an 8MP front camera, for video calls and facial recognition functions, and a twin rear camera set-up with wide-angle and ultra-wide angle lenses.