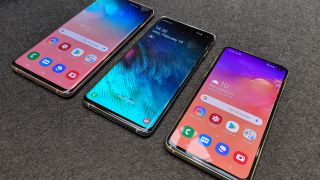 Samsung has revealed its latest addition to the all-conquering Galaxy range: the Samsung Galaxy S10.

The new Galaxy phone collection comprises more models than ever, with the line-leading Galaxy S10 joined by a larger, more expensive Galaxy S10+ and a more compact, more affordable Galaxy S10e. There will also be a Galaxy S10 5G due in May, with an even bigger, 6.7-inch screen.

It's ten years since the first Galaxy S, and Samsung has gone big to celebrate – not only with new devices but with some headline-grabbing Galaxy S10 features and specs, too.

These include HDR10+ support, an updated "Infinity-O" OLED screen, 1TB of memory, a triple-lens rear camera, an ultrasonic fingerprint sensor under the display, wireless sharing of your battery power, Dolby Atmos sound and AKG speakers, and wireless earbuds. Oh, and the inclusion of a trusty 3.5mm headphone jack.

All these new features come at a cost, with the top-of-the-range Galaxy S10+ 1TB model topping out at £1399.

The S10 and S10+ are the world's first phones to feature HDR10+-certified screens for ultimate 4K HDR picture performance. Those pictures will be on the new Infinity-O Display, which is a Wide Quad HD+ Dynamic AMOLED.

On the 'standard' S10 this is a 6.1-inch screen, while the S10+ offers a 6.4-inch screen, but both have a 19:9 aspect ratio Edge design, with the screen rolling over the edges of the handset. The smaller S10e has a 5.8in flat screen design and a Full HD+ Dynamic AMOLED. With last year's flagship Galaxy S9 sporting a 5.8-inch screen, it's a jump in size when it comes to comparing like-for-like models.

All the phones have a microSD card slot for adding up to 512GB of extra storage too, so space shouldn't be a problem.

As for battery life, you're looking at 3100mAh, 3400mAh and 4100mAh batteries respectively, the latter giving the S10+ the edge even over the latest Galaxy Note 9. Last year's Galaxy S9, with its 3000mAh battery, has also been left in the shade.

The Galaxy S10 and S10+ have triple rear cameras and dual front cameras for an impressive five lenses.

The two larger S10 devices also benefit from the new "embedded ultrasonic fingerprint", which sits beneath the screen towards the bottom of the phone, but you won't find this on the S10e, which makes do with a capacitive fingerprint scanner. All three also have face recognition for unlocking, too.

Wireless PowerShare is on all three S10 phones, which allows you to share your phone's battery juice with any other wireless charging device simply by placing the two devices close together. All the new Galaxy phones are IP68 water resistant, too.

There is a nod to sound, too, with support for Dolby Atmos, AKG-tuned speakers and a bundled pair of Galaxy Buds true wireless earbuds, which are 30% smaller than the Samsung's previous Icon X earphones.

All these new features come at a cost, with the top-of-the-range Galaxy S10+ 1TB model topping out at £1399. The full prices are as follows:

Samsung Galaxy S10 pre-orders are open from now, with the phone set for release on 8th March.