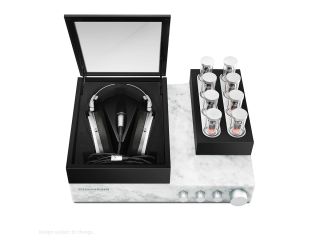 It’s not every day you set out to remake a classic. In 1990-91, Sennheiser unveiled Orpheus. These highly regarded electrostatic headphones were seriously limited in number and very much at the premium end of the market, each pair costing 20,000 Deutsche Marks (about €10,000).

Over time, the headphones (and associated tube amp) took on a kind of mythical quality, and yet occasionally magazines would unearth a pair to pit against the best in the industry. Even in recent years, the Orpheus still held claim to being the best in the world — but Sennheiser had already started thinking about a successor. “A lot happens with technology in 20 years,” says Axel Grell, Portfolio Manager Audiophile at Sennheiser. “We started to ask: what could be done better? How can we make the sound of a headphone even better than the sound of the Orpheus?”

A team of six began to analyse the original Orpheus, and eventually grew to become 10-strong. Everything from the largest component to the smallest detail was carefully considered, in order to ensure the new Orpheus would be worthy of the name: marble housing eliminated problems stemming from movement; teams deliberated on the precise mix of foam and material for the headpad to ensuring maximum comfort; and aluminium components were milled from blocks rather than screwed together, ensuring a satisfyingly smooth and solid feel.

A labour of love

Regular testing and iteration was of paramount importance. “We have a big office, and would wear samples for hours to try and find problems,” explains Grell. For instance, the headpad gained a ‘comfort zone’ in the middle, softening the foam at the head’s most sensitive point. When someone remarked long-term use of the Orpheus was “a bit warm,” a cooling system was devised and implemented.

The project was very much a personal journey for Grell: “I started at Sennheiser in 1991, when development of the original Orpheus had just finished. I had the impression that it simply wasn’t possible to make it better — it was just perfect.” Immediately, Grell and other acoustic engineers became fascinated with trying in all his work to get as close as possible to Orpheus. “As a young engineer, it was the benchmark,” he continues. “There will be some in our offices, and our engineers will always be inspired to get a little bit closer to Orpheus in whatever they happen to be designing.”

Grell says he feels hugely honoured 25 years after the original Orpheus to improve, together with the Orpheus team, on something that was already the best - and adds that the company has learned much from the project that can now be implemented elsewhere: “One example is all the stepper motors inside - those kinds of things can be very noisy, but we learned how to make them with a much lower noise level, and this will in the future help us do new things.”

But the real prize for Grell was the experience of listening to music with the new headphones. “There are details in pieces of music that I’ve known very, very well for years; I’d just never heard them before,” he says. “So when I tried the new Orpheus for the first time, I heard these things and had tears running down my face. I’ve been working in this business for 24 years now — I’m a professional. But I was there in tears, just because it sounded so good.”