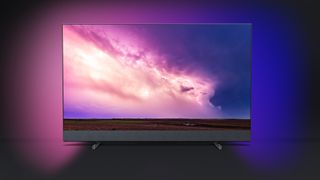 The 8804 Series, available in 65in (65PUS8804), 55in (55PUS8804) and 50in (50PUS8804) screen sizes features a 50W, 2.1 channel set-up designed by the British speaker manufacturer. The system's two front-firing drivers are hidden beneath a cloth speaker grille designed by Kvadrat, the Danish textiles company.

There's also a super narrow two-tone bezel that runs around the edge of the screen.

All models are powered by the Android TV Pie operating system, boast Google Assistant built-in and support 'Works with Alexa'.

This new range ticks virtually all the HDR boxes too, with Dolby Vision (and Dolby Atmos), HDR 10+ and HLG support all included.

Philips claims the 8804 series uses the same B&W speaker system found in its five-star 55OLED903, so we're expecting big things when the range goes on sale during the first half of 2019. Pricing is still to be confirmed.

Philips announces The One – a TV for the masses