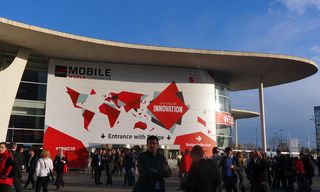 MWC never fails to bring us a plenty of huge launches from the world of smartphones, tablets and portables, but this year was particularly big, with flagship announcements from the likes of Sony, Samsung and HTC, as well as surprises from Lenovo and Dolby, mid-range handsets from LG and plenty of VR and wearable news to boot.

We scoured the show halls to get hands on with all of this to give you a rundown in pictures of the past few days. Read on below or head to our MWC news round-up for more.

Dolby demoed its work with virtual reality company Jaunt, showing off three clips that offer a 360-degree audio experience to match the 360-degree visual experience. We're going to be watching this closely for updates - our first impressions were pretty impressive.

MORE: Harman Kardon One wireless speaker is built for HTC One M9

HTC announced the successor to the excellent One M8, the HTC One M9. It features a reimagined unibody design, high-res music support, improved cameras and an updated user interface.

HANDS ON: HTC One M9 review

Among its wearable announcements, Huawei outed its TalkBand N1, a pair of "hi-fi|" wireless sports headphones with 4GB of memory and fitness tracking built in.

Lenovo announced two new tablets and a smartphone packing Dolby Atmos processing. We've only seen this once previously on the Amazon Fire tablet range, but the A8 and A10 are the first Lollipop slates with the technology, while the A7000 is the world's first smartphone.

LG saved any news of its flagship G4 for another day, instead using MWC 2015 to debut four new entry-level and mid-range handsets. The LG Magna (pictured) sits at the top of the four and offers a 5in, slightly curved screen, quad-core processor and an 8MP camera, with 8GB of on board storage and 1GB RAM.

Samsung ditched the plastic with the announcement of the Galaxy S6 and Galaxy S6 Edge, with both handsets offering a more premium design with aluminium edges and glass panels on the front and back. Both offer pretty much identical spec, including a 5.1-inch Super AMOLED display with 2560 x 1440 resolution, a proprietary Samsung octa-core 64-bit processor, stripped back UI and improved cameras with new f/1.9 lenses for better low-light results (16MP rear/5MP front). The S6 Edge offers a unique screen design with curved edges at either side and some software tweaks to boot.

Sony broke with tradition this year and didn’t announce a new flagship smartphone at MWC 2015, instead concentrating on a new flagship tablet, the Z4 Tablet. Featuring a bright 2560 x 1600 2K screen in a first for Sony portable devices, it’s the world’s thinnest and lightest 10in tablet, offering a slimmer, more refined design to its predecessor, a fast new processor and improved cameras.