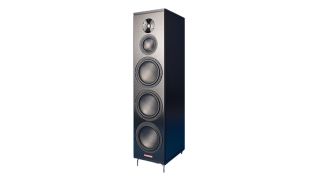 Almost two years after introducing its most affordable speakers, the A3 floorstanders (£11,998), Magico has expanded the A-Series with a more superior model.

Due in spring 2020, the A5s (£24,998) are three-way, five-driver floorstanders with brand-new drivers and crossover materials, and construction borrowed from the company's higher-ranging speakers.

The three new 9in bass drivers and single 5in pure midrange driver (a first for Magico) both use the company’s Graphene Nano-Tec carbon fibre sandwich cones to achieve the “highest possible” stiffness-to-weight ratio – something Magico has pursued over the past 15 years. In the bass drivers, the chassis has been designed to maximise the driver’s airflow by being of optimum stiffness and damping, while in the mid drivers a foam surround has been chosen to limit distortion.

Shared with the A3, the A5’s tweeter combines a pure beryllium-diaphragm with a 28mm dome, with the neodymium motor system housed in an engineered back chamber that’s damped with Magico’s most effective materials.

The Magico A5s are housed in internally-braced, aircraft-grade aluminium chassis (finished in brushed black anodised aluminium) that each weigh 180 pounds, which, to put a festive spin on things, is half the weight of a reindeer. A dedicated sub-enclosure houses the midrange driver to protect it from the energy the bass drivers fire back into the cabinets.